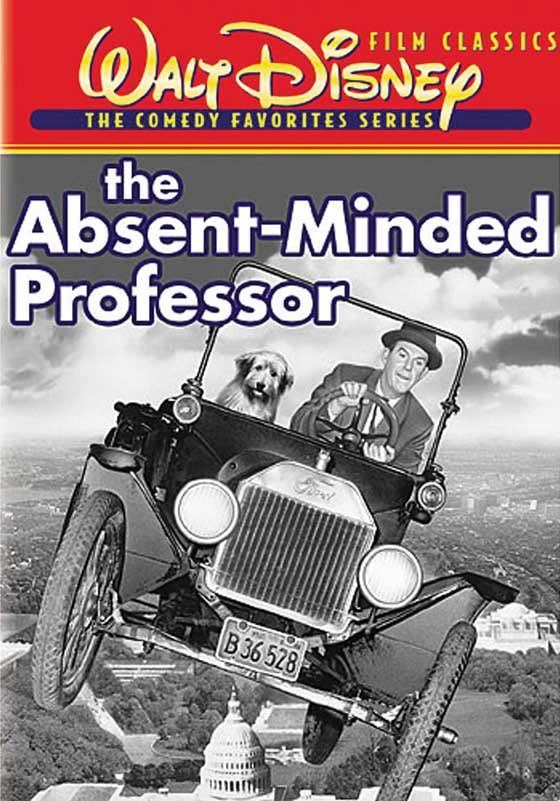 The classic begins with a bang – a lab accident blows up Ned Brainard’s garage and leaves the professor knocked out cold.

The good news? This explosive experiment has produced a wondrous new substance – a rubbery material that when rolled up in a ball and dropped gains height with each bounce. It’s almost like this rubber can fly so, of course, the professor names it flubber. And what’s the first thing he does with flubber? Why, use it to create the world’s first flying Model T of course!

The bad news? While he was out cold the professor missed his wedding…for the third time! Betsy Carlisle is his long-suffering fiancee. While she loves her Neddy, this is it – she doesn’t want to hear any more excuses. “I say, three strikes and you’re out!”

To make the situation that much more difficult for Ned, he has a rival for Betsy’s attention. Professor Shelby Ashton is egotistical and even more self-absorbed than Ned but he has one thing going for him – he knows how to shows up on time.

To get Betsy’s attention Ned puts his flubber to use and this is where the fun really begins. When the college’s basketball team is losing badly, Ned secretly irons flubber on to all of the players’ shoes. When the second half starts the Medfield team is now able to jump, not just over the other team, but right over the gym rafters!

While this stunt doesn’t impress Betsy, Ned and his flying Model T do catch the attention of all three branches of the US military and a particularly unscrupulous businessman. Car chases and hijinks soon follow.

As children do sometimes do as they see, the biggest concern might be language. One of the villains – businessman Alonzo Hawk – calls people “idiots,” “stupid,” or “tells them to shut-up.”

There is some violence – a shoot-out in which no one gets hit, and two thugs unsuccessfully trying to get Professor Brainard – but this is of the comic sort and even our six-year-old knew everything was going to be okay (but our four-year-old had to be reassured).

Oh, and at one point Hawk gambles on a basketball game.

It may be worth pointing out to younger viewers that the “hero” of this story, Professor Brainard, is not a good example at the beginning – he’s prioritized science over his bride-to-be! Thankfully, by film’s end he’s learned the error of his ways.

This classic spawned a sequel and two remakes but they never improved on the original. A flying car, a villain who can leap buildings in a single bound, a damsel who’s in distress because her bumbling knight has left her at the altar again – this is fun that everyone will enjoy.

Through the years Reformed Perspective has created a number of pro-life comics and memes, and this is where we are going to collect them, so that th...