Articles, news,and reviews with a Biblical perspective to inform, equip, and encourage Christians.

We think you'll enjoy these articles:

by Armand M. Nicholi Jr. 2002 / 244 pages While C.S. Lewis was 40 years younger than Sigmund Freud, he was well acquainted with his ideas. Freud hated and feared God, and as a young man Lewis found Freud’s atheism attractive. But after his conversion, Lewis used his considerable skills to answer and rebut Freud’s arguments against God. What author Dr. Armand Nicholi has done is present a type of conversation between the two, with Freud usually presenting first, and Lewis them coming after to respond and correct. So what do these two “talk” about? As the subtitle shares, C.S. Lewis and Sigmund Freud debate God, Love, Sex, and the Meaning of Life. The two also discuss whether morality exists and why there is suffering. And they take a close look at death. It is a fascinating book, part conversation, but also part biography, giving us a good understanding of both men by sharing the similarities and differences in their histories. The only caution I would note is that when it comes to the problem of pain both Lewis’s and the author’s Arminian leanings come out. For an interesting Reformed perspective, see Joe Rigney’s “Confronting the Problem(s) of Evil.” But overall this is a very readable, very interesting account of two of the twentieth century’s pivotal figures and their ideas, which continue to impact us today. A 40-page preview can be viewed here.

“As soon as the people heard the sound of the trumpet, the people shouted a great shout, and the wall fell down flat, so that the people went up into the city, every man straight before him, and they captured the city.” – Joshua 6:20 Scripture reading: Joshua 6:8-21 God’s strategy for defeating Jericho was completely unrealistic. You can’t defeat a city with walls so thick that you can build a house into them, by having a parade around it. Israel was going to look absolutely foolish; it would show that they had no strategy – that they didn’t know what they were doing. Do you recognize the logic of these instructions? What did Israel have to do? In a way, we say, They didn’t have to do anything. You can hardly call that waging war, just marching and shouting. Exactly. God said, Take heart from everything that I have done to show you that I am with you. Believe that I have come to judge My enemies and to give the land to you. The way to victory for Israel was by working out their faith in God’s promises, by following God’s strange strategy. God has promised us victory over the world in the very same way. John wrote, This is the victory that has overcome the world—our faith. Who is it that overcomes the world except the one who believes that Jesus is the Son of God? (I John 5:4-5) We have to work out our confidence that Jesus is the Son of God by preaching the gospel, taking up our cross and following Him. The world will think we’re fools, but that’s what Jericho thought too, before the walls fell down. Take heart, said Jesus; Ihaveovercometheworld. Suggestions for prayer Thank God that Jesus Christ has overcome the world, that by faith, we already now share in His victory, and when He comes again, we will share fully and eternally in His victory.

This daily devotional is available in a print edition you can buy at Nearer to God Devotional. Rev. Dick Wynia is the pastor of the Vineyard Canadian Reformed Church in Beamsville, Ontario.

by Christine Cohen 351 pages / 2019 15-year-old Cora lives in a time of horses, and swords, and meat pies. It's also a time of poverty, and bitter winters, and threadbare clothing, and not enough food to make it through to Spring. To make things even worse, ever since Cora’s father was killed, the village has treated her and her family as if they are cursed, and as if that curse is contagious. But no matter, Cora is resourceful, and she’ll do just about anything to ensure her family lives through the winter. But how does a young girl stand up, by her lonesome, to the village god, the tyrannical Winter King, who is taking their food? I didn’t know quite what to think of this book in the early stages. While the village other villagers were religious, Cora was not. And she was the hero. So how was this a Christian book, then, if the god in the story seemed to be the bad guy? Well, as one reviewer noted, this is a very Protestant book in that Cora rejects a false religion in favor of the true one. She rejects the false representation of the Winter King that the village’s religious authorities maintain. But then she uncovers a book that tells a very different story about this King, presenting instead, a God who loves. CAUTIONS Cora is bitter and sometimes manipulative, and so driven to keep her family fed that she does stuff that she should not. There's good reason for her desperation – death is reaching for her whole family – but that it is understandable makes it tricky ground for the younger reader to tread. This is not a heroine in a white hat, and for the pre-teen, or even younger teen reader, used to simpler morality tales, they might not have the discernment skills yet to be able to cheer on a hero whose actions are not always praiseworthy. I feel like I'm making Cora sound darker than she is. There is surely darkness in her – but there is also a darkness around her that she is fighting, futilely at first. And then hope comes. CONCLUSION From the cover to even the way the pages are laid out, this is a gorgeous book, with a deep and satisfying story. I'd recommend it for 15 and up, but I know adults will find this has real depth to it that they'll enjoy exploring.

There’s no end of mysteries to explore in this weird, wacky, and wonderful universe. How is it that light can be both a particle and a wave? How is it possible that the complexity of a single cell surpasses that of the largest city? And how come there’s no synonym for thesaurus? Among life’s many questions there’s a small collection that garners special attention – they are the deepest and most unfathomable of them all. Or, at least to secular sorts. It turns out that God has given clear and ready answers to any who have the ears to hear. Q. Which came first, the chicken or the egg? A. The chicken. How can you have one without first having the other? But when we understand that God created everything in just six days then we can conclude that, just as He created Adam full grown, He probably started chickens off with their adult versions too. Q. If a tree falls in the forest, and there’s nobody around to hear it, does it make a sound? A. Yes. Is sound the vibrations in the air, or do those vibrations only become sound when they are heard? Before you answer, consider how there are other vibrations in the air – too low or too high for us to hear – that we consequently don’t regard as sound. However, the problem here is that the premise of the question is wrong: Christians know there is always Somebody around. Q. How did life begin? A. With a word. Evolution has no explanation for the origin of life since evolution's two mechanisms – natural selection, and random mutation – require an already living, already replicating organism to exist before they can act on it. Just as there is no possibility of selecting until there’s a pool of candidates to select from, there can be no mutation until there’s an original to mutate from. While secular sorts have no answer to give, Christians can read all about life’s origins in Genesis 1 and 2. Q. Is my glass half empty or half full? A. Half full. Nothing we have in life is deserved so if we’re given a glass that’s got water right up to the midway point we should view that gratefully, happy for the gift given. Q. If God can do anything, can He make a rock too heavy for Him to lift? A. No. God can’t do everything. Specifically, He can’t do anything contrary to His own character. That’s why He can’t ignore sin – His character won't allow it. And that's why, to offer us mercy, Jesus had to come to Earth to take our sins on Himself – God could only offer mercy in a way that still satisfied His need for justice. It would also be contrary to His character, as a God of order, to make rocks too heavy for Him to lift...or to make square circles, or any number of other nonsensical things. Q. Is there life after death? A. Yes! Unbelieving sorts will speculate about there being something after life, but Christians don’t have to. That Jesus died and rose again is the assurance of our own resurrection. He’s beaten death! Q. What is the purpose of life? A. To glorify God and enjoy Him forever. Money, fame, power, status, and even family bring only temporary joys. What Man was created for was an eternal relationship with our infinite God.

Bonus: Did Adam have a belly button? A. No. Belly buttons are scars from our umbilical cord connection to our mothers, and since neither Adam or Eve was born, neither of them would have had this scar. Double Bonus: Who did Cain marry? A. His sister (or possibly his niece). While we aren’t supposed to marry relatives now, that prohibition came 2,000 years after Cain's time (Leviticus 18:6). So why could he marry a close relation and we can't? The explanation probably comes down to genetics. We all have genetic defects - damaged information in our DNA - but so long as we marry someone unrelated, the effects of those errors won’t generally be seen in our children, as the most serious effects of the error are likely to be countered by the corresponding and error-free section in our spouse’s genes. But close relatives may share the exact same defects, and were they to marry, their children would be more likely to have genetic diseases. This didn't apply to Adam and Eve, because they started off with perfect genes, and when their children married, they still didn’t have many errors to pass on. It was only after a couple thousand years that genetic errors would have so accumulated that close relatives had to be barred from marrying.

WHAT’S INSIDE: C.S. Lewis on real happiness / A most important question: What is Man? / How bad is the teen anxiety epidemic? / Blame it on the brain? / Choosing Evolution / 6 duties of parents / A history of Healthcare / What if sales could be beautiful? / Lessons from the occupied Netherlands / and much, much more! 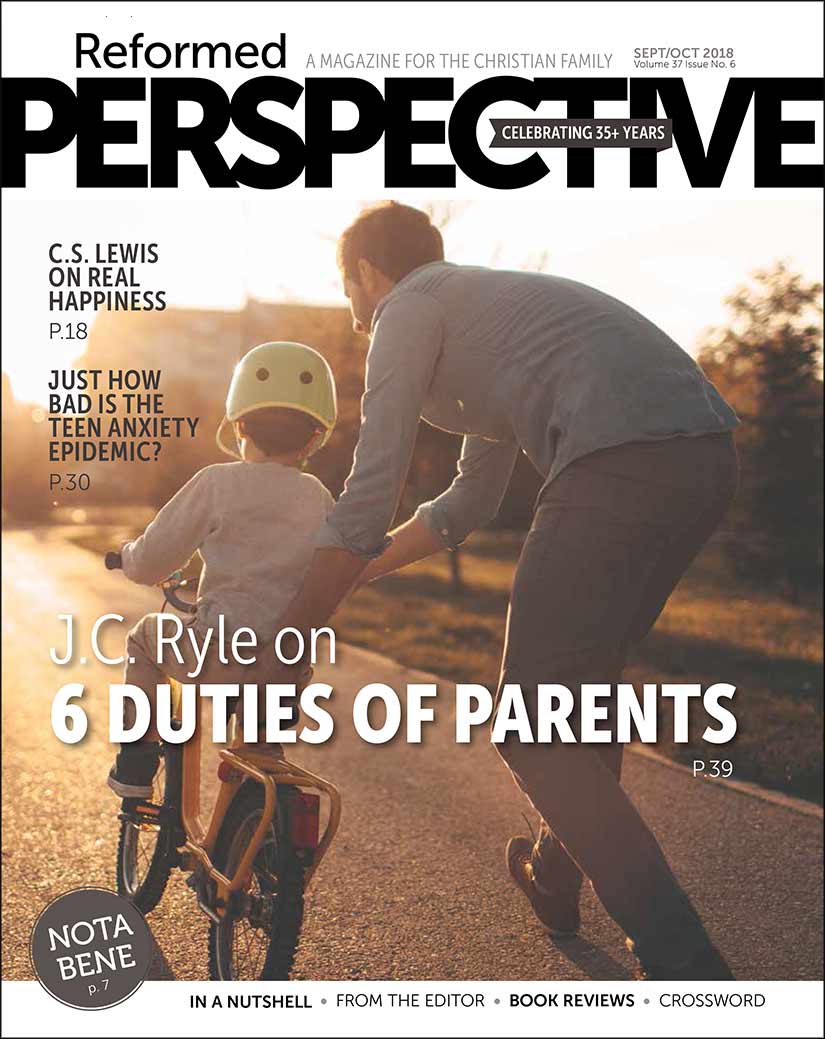 Ode to hurt...or why my tolerant nature can't stand your opinions

In my idyllic and very Christian small town I keep forgetting that even here there’s a spiritual war going on. This past weekend I got a reminder in