John Piper: You are not addicted to pornography (5 minutes)

Building friendships with your young children

This article shares eight ways we can foster friendship with our children (and none of them involve being a pushover).

The inner workings of your cell are as complicated as a city! (10-minute read)

We need DNA to make proteins and proteins to make DNA. So which came first? Ann Gauger gives a fascinating overview of just how brilliantly even our cells have been designed.

Wouldn’t it be wonderful if we could ban pornography? Strangely, some conservatives don’t think so, worried that if we impose our morality on others, the Left will try to impose theirs on us. Jonathon Van Maren lays out the contrasting conservative positions here, and it is certainly worth reading.

But what we don’t hear is an explicitly Christian position: that we shouldn’t impose our morality, but God’s. We get our morality from God, so that might not seem all that different. But consider this: when Christians try to impose God’s morals without making mention of God, then we seem to be doing exactly what the Left does. We seem to be imposing our arbitrary standards – merely our own opinions – on everyone else. So we have to stop presenting God’s standards as if they are simply our own, or simply a good practical approach – we need to argue for God’s standards as God’s standards, which is the reason they are applicable to all of His creation.

Pornography is, of course, a health issue – flouting God’s Law often results in bad health consequences (ex. drunkenness, promiscuity, homosexuality, all lead to health issues). But it is first and foremost a sin issue. If we lead with the health aspect, we’re not standing on God’s solid foundation, and then we shouldn’t be surprised when we find we’re on shaky ground. One example: pornography might result in some health issues, but frequent users have been found to be more tolerant of “alternative lifestyles” like homosexuality and transgenderism. So, from a secular perspective, sure, it might have downsides, but this upside too!

The key then is that we need to address this issue (and all others) not as conservatives, but as Christians. In this case, that means speaking of why God created sexuality, and how He has made each one of us in His very Image, and how, when we depart from our Maker’s plans for us, it is to our own hurt.

Does that mean we have to start quoting chapter and verse when the speak to this issue? No. But it does mean that we need to lead with God, our Solid Rock. That might look like this:

“God says that sex is something special, saved for marriage, and a private act. That’s why social science also shows that sex, in that setting, binds hearts closer together, helps keep families intact, and ensures the children that may result will be born with a mom and dad. Pornography treats sex as cheap, dirty, and a throwaway. And that leads to promiscuity, disease, unexpected pregnancies,  erectile dysfunction, addiction, and so much more. God made us, so He knows what’s best for us. And pornography is just so very harmful…”

How I was (temporarily) deceived

There’s a lot of impressive-seeming “scholarship” out there that attacks God’s Truth, and as a young man Dr. Wes Bredenhof got stymied by one bit of it – the Documentary Hypothesis. He soon discovered, though, that there are answers to be found for the Bible’s many critics…if we’ll look for them.

How long does it take to read each book of the New Testament?

Sometimes it might seem like reading the Bible front to back is an intimidating task. But would we dive in more eagerly if we understood just how little time it takes to dig in deep? For the full chart click on the link above or the picture below. And for a number of different Bible reading plans (from Ligonier Ministries) click here. 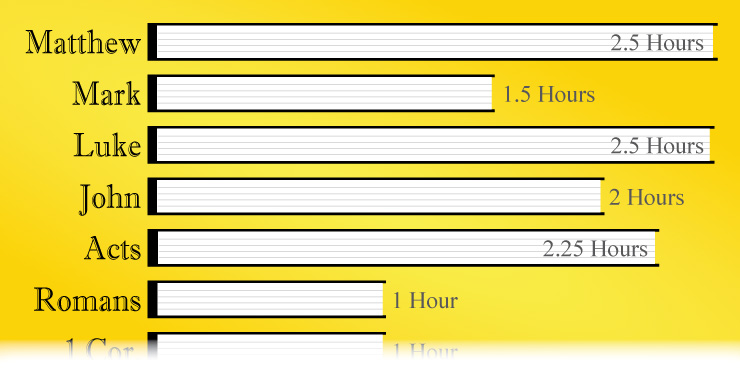