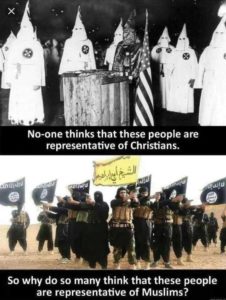 There’s much talk lately about Islamophobia, so let’s be clear on this at the get go: Muslims are people we should love and respect — and welcome.

Although I disagree deeply with Islam (the religion that centers itself on Muhammad and the Qur’an), I believe Jesus’ command to love my neighbor requires that I respect those with whom I disagree. After all, all people — including Muslims — are made in the image of God.

But let’s be clear on this, too: having reasonable, evidence-based concerns about Islam — especially when adherents closely follow the violent life and teachings of Muhammad — is not an instance of Islamophobia.

Rather, I am saying that we need to do some careful thinking.

With this end in mind, let’s assess a meme I often see circulating on the internet.

The meme has two pictures with a caption under each. The first picture is of a meeting of several white-robed. white-hooded, Ku Klux Klan members. The caption: “No one thinks that these people are representative of Christians.”

The second picture (immediately below the first) is of a dozen black-garbed-black-masked ISIS fighters with weapons at the ready. The caption: “So why do so many people think that these people are representative of Muslims?”

The apparent implication: just as the KKK isn’t Christian, so too ISIS isn’t Islamic.

Most or all the Christians and Muslims I know are decent people, and, yes, we should protect them from being misrepresented. So far so good.

The more I learn about the life and teachings of Muhammad (see resource list below), the more I am convinced that Muhammad was an extremely violent man bent on world domination by force — and he teaches his followers to be and do likewise. (It’s interesting that the present leader of ISIS has a PhD in Islamic Studies.)

Unlike Jesus, who shed his own blood for others to spread his message, Muhammad shed the blood of others to impose his message.

Now consider the notion of phobia. A phobia is an irrational or ungrounded fear, aversion, or hatred.

Consider arachnophobia, an irrational ungrounded fear or hatred of spiders. Clearly, it’s possible to have reasonable, non-phobic concerns about some spiders if the spiders display evidence of being harmful or lethal to humans.

In recent years I’ve seen too many public discussions shut down because people who raise important questions are dismissed as “phobic” when in fact they’re not. The if-you-disagree-then-you’re-phobic card is a smokescreen against truth — it’s an ad hominem fallacy — and it misleads audiences untrained in logic.

In view of ISIS and its close affiliation with Muhammad’s violent life and teachings, the challenge before us is threefold:

Yes, this is no small challenge. It also isn’t Islamophobia.

Speaking truth and loving others can — and should — go hand in hand.

This article first appeared in The Carillon, on March 2, 2017 and is reprinted her with permission. Hendrik van der Breggen, PhD, is associate professor of philosophy at Providence University College.

The Riot and the Dance: Water

Documentary 2020 / 84 minutes RATING: 8/10 Biologist Gordon Wilson has produced another beautiful ode to God's creation. The Riot and the Dance: ...

WHAT’S INSIDE: Beyond judging a movie by its poster / Second-hand Scriptures: the case against biblical dramas / The pitch meeting for Redeeming Lov...