Possible evidence of life on Mars may have been discovered…perhaps. Or not. 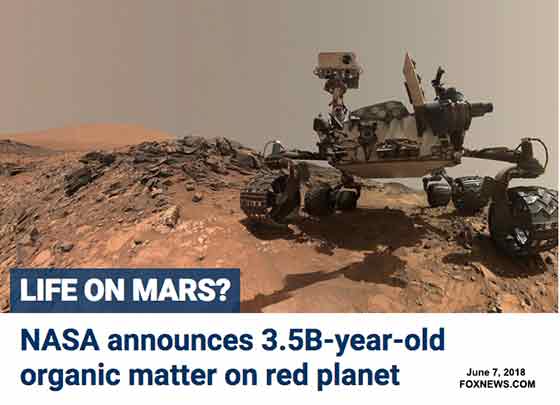 When the Mars Rover’s latest findings – organic molecules – were reported in early June it unleashed the latest round of hype about the possibility of life on Mars. Stories on FoxNews.com, and in the New York Times ran the far too hopeful headline “Life on Mars?” but clarified further on in their articles that, no, this wasn’t actually proof. Of the three possible causes for these organic molecules, biology – life – was one of them, but there were two other less hype-worthy possibilities: geology and meteorites.

Anyone who reads the newspaper science section regularly knows that life-on-Mars stories pop up repeatedly, with the previous round happening just a year ago. FoxNews.com ran this headline:

“If you’re hoping humans find evidence of life on Mars, scientists have some very good news.”

That story talked about evidence of there being water and oxygen in Mars’ distant past. Water and oxygen are key elements that life might have needed “if it ever existed on Mars.” But this finding was akin to saying since cars need aluminum, if we were to find evidence of aluminum deposits this would be an exciting development in our search for evidence of cars on Mars.

Perhaps the biggest “life on Mars” story of them all took place back in 1996 when all the newspapers covered a NASA team’s announcement that the Martian meteorite they were studying seemed to have evidence of microscopic life. It was billed as being possibly the greatest scientific discovery of the century.

Except it wasn’t. Ten years later and scientists had found non-biological explanations for all the meteorite’s microscopic features.

So why this ongoing hype about life on Mars, despite the less than encouraging findings to date? Because secular science needs to find life elsewhere. There is a problem with the evolutionary account, one that even evolutionists acknowledge – life’s origins. Selection and mutation need something to be already living – and self-replicating – before they can operate. In other words, evolution can’t begin until after life has begun. So how, then, did that first simple life form come to be?

Just consider, even with thousands of brilliant minds, and billions of dollars worth of the most amazing tools and machinery, and we still can’t create life on purpose. How very far we are then, from explaining how it could happen by accident.

But if we could find evidence of life on Mars, well wouldn’t that show life can just…happen? Finding life on Mars would make things a little less awkward for evolutionists.

Are you “blessed” or “privileged”?

They might seem close synonyms but the Devil is in the details **** A couple of years back a viral video showed a large group of older teens getting...