A review of P.J. Hoedemaker’s Article 36 of the Belgic Confession Vindicated Against Dr. Abraham Kuyper

Anyone who has ever studied the Belgic Confession, even on a superficial level, is aware of an oddity in article 36. This is the only place in the Three Forms of Unity where we find a footnote in most versions of the Confession. Whether it is the United Reformed, Canadian Reformed, or Protestant Reformed Churches in North America, or the Free Reformed Churches of Australia, all have an additional footnote.

Article 36 is titled “The Civil Government” or sometimes “Of Magistrates” and addresses what we confess about the role of the government. The relevant text in the body of the confession originally read:

[The government’s] task of restraining [evil] and sustaining [good] is not limited to the public order but includes the protection of the church and its ministry in order that all idolatry and false worship may be removed and prevented, the kingdom of antichrist may be destroyed, the kingdom of Christ may come, the Word of the gospel may be preached everywhere, and God may be honoured and served by everyone, as he requires in his Word. (Italics added)

But the clauses that I’ve italicized above were moved from the body and relegated to footnote status a century ago, as is explained in the Canadian Reformed edition here:

The following words were deleted here by the General Synod 1905 of the Reformed Churches in the Netherlands (Gereformeerde Kerken in Nederland): all idolatry and false worship may be removed and prevented, the kingdom of antichrist may be destroyed.

I’ve been a pastor in both the Canadian Reformed Churches, and the Free Reformed Churches of Australia, and to my knowledge, neither federation has ever made an official decision about the status of this footnote. Do we confess this or not? It is an odd ambiguity in our Three Forms of Unity (the Belgic Confession, the Heidelberg Catechism and the Canons of Dort).

That’s why it was with great interest that I began reading a small book, recently translated, on this very topic. Article 36…vindicated against Dr. Abraham Kuyper comes from the controversy which led to the words being deleted in 1905. It provides some of the historical background, illustrating that the deletion was not without its opponents. This book also provides an occasion to reflect on whether it may be time to revisit the matter in an official, ecclesiastical way.

The author, Philippus Jacobus Hoedemaker (1839-1910), was a curious figure. While he grew up in a family with roots in the 1834 Secession (in which a number of congregations split from the Dutch national church) he himself became a minister in the Dutch national church. However, unlike so many others in the State church, Hoedemaker was a conservative, and confessionally Reformed.

This book is a response to a series of articles written by Dutch theologian and journalist (and future Dutch prime minister) Abraham Kuyper in his newspaper The Herald in 1899-1900. In these articles, Kuyper argued against the original wording of article 36 – he did not agree with the civil government being called on to address idolatry, false worship, and the kingdom of the antichrist.

In 1896, Kuyper went a step further. Together with other notable theologians in his denomination (the Gereformeerde Kerkenor Reformed Churches), including Herman Bavinck, Kuyper put forward a gravamen against article 36. A “gravamen” is an official objection to a point of doctrine.

These eight ministers alleged that article 36 did not conform to the Word of God and they asked the Synod of 1896 to make a judgment on the matter. The Synod decided to appoint a committee to study the matter, a committee which bizarrely included Bavinck and Kuyper (!). It was the work of this committee which would later result in Synod 1905 deleting the allegedly unbiblical words.

GOING BACK TO THE ORIGINAL? 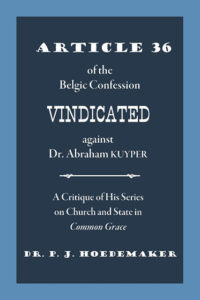 Let me make a few comments about the translation. There are a few idiosyncrasies that readers should be aware of. When Hoedemaker refers to “Lord’s Days” in the Heidelberg Catechism the translator literally renders them “Sundays” instead. And instead of the Secession of 1834 (Afscheiding), he uses the term “Separation.” Elsewhere he uses the term “Nonconformity,” and I believe he is translating the term “Doleantie.” Aside from those sorts of minor things, the book reads quite well in English.

In his book, Hoedemaker argues for the original form of article 36. Or, more accurately, he argues against Kuyper’s objections to the original form of article 36. He maintains that Kuyper was inconsistent. On the one hand, Kuyper wanted to honor King Jesus as the Lord of all of life. But on the other hand, Kuyper was arguing that King Jesus has no crown rights over the responsibility of the civil government with regard to idolatry, false worship, and the kingdom of antichrist.

Hoedemaker alleged that this inconsistency was owing to political expediency. Abraham Kuyper was getting into politics and article 36 was an embarrassment in trying to build bridges with Roman Catholic politicians.

Early on Hoedemaker makes a point I find especially compelling. He alleges that the discovery of “the fatal defect” in article 36 is “not the result of the ongoing investigation of the Scripture; but exclusively causes which lie in the times, and in apostasy from the living God.”

He states repeatedly that Kuyper and others were not arguing from exegesis, but from pragmatic considerations and false inferences. The pragmatic considerations had to do with Dutch politics. The false inferences were along the lines of the Confession requiring the civil magistrate to persecute unbelievers and false believers. Hoedemaker is especially persuasive in addressing that notion.

I should note that this book is not exclusively about Belgic Confession article 36 – it also serves as something of a polemic against the 1886 Doleantie (another church split). Hoedemaker writes, “The first step on the road to Reformation is the recovery of the normal relations of church and state.” But in wanting to undo the 1886 Doleantie, he’s arguing that all Reformed believers should have gone back to the national church despite its waywardness!

So who should read this book? I would especially commend it to those with an interest in politics. When we have so little in our Three Forms of Unity about politics, what little there is should get our attention. Is it time to revisit the formulation of article 36? This is where I believe office bearers and especially ministers would do well to give this book a read too. Perhaps we need a proposal to a synod to clarify the status of the footnote and perhaps even to restore it. Note well: we are not talking about changing the Confession or adding something to the Confession that was never there to begin with. This is something completely different. In a 1979 article for Clarion, the Canadian Reformed Churches’ Dr. J. Faber argued for completely rewriting that part of article 36. That is a possibility. But if the footnote can be re-examined from a biblical standpoint, perhaps it would be as simple as cutting and pasting the text back into place.

Dr. Bredenhof blogs at yinkahdinay.wordpress.com where a slightly longer version of this review is available here. He is the pastor of the Free Reformed Church of Launceston, Tasmania.

Through sheer repetition, some Christian words seem to blend into each other and we forget their distinct meanings. That's why the word grace is some...