Covenant Reformed Church of Grande Prairie, Alberta is prayerfully seeking a Full-Time Pastor to join us as we continue to be a faithful witness to th...

Trinity Reformed Church of Lethbridge, Alberta is prayerfully seeking a Full-Time Pastor of Congregational Life to serve alongside our Senior Past...

Minuscule: Valley of the Lost Ants 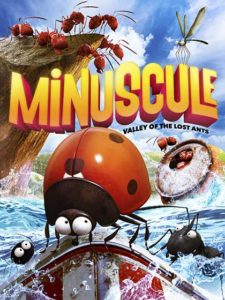 In this utterly unique film, a lost ladybug teams up with a colony of black ants to fight off a horde of red ants who want their sugar stash.

A couple of things set this film apart. First, it seamlessly meshes animation and gorgeous nature footage, with the overall look more like a Planet Earth episode than a kid’s cartoon.

Another unique element is the lack of dialogue – other than  20 seconds of scene-setting narration, no one speaks. Or, rather, when they speak, it is only in Antish and Ladybuguese (I had the English subtitles on, but shucks, no translation was provided). Our kids had to decipher the storyline from strictly physical cues which had them paying very close attention. It also meant that their Dad had to occasionally “narrate” the action to help them figure out what was going on.

This is G-rated film, free of any language, sexuality, or violence concerns (there is a big battle scene but no injuries are shown, and the rest of the “violence” is of the slapstick variety).

But while the action was muted compared to many an animated film, Miniscule‘s brilliant use of sound and music really amplifies the tension. If you have younger viewers – maybe 9 and under – you can help them through these sections by either turning down the sound (minimizing the music’s impact) or, by doing what we did. While we were still early in the film, we ended up showing our girls the last ten minutes of the film so they could know that it all turned out alright. They still sometimes forgot so we’d have to remind them, but each reminder helped a lot. Their response reminded my wife of how when we as adults have our own tense moments, we’re also comforted by knowing a happy ending awaits – that’s one reason why God has “given away the ending.”

It might also help youngsters to know that the only actual bad guys in the film are the red ants and, briefly, a large fish. Any other seemingly villainous sorts turn out to be friends.

Finally, the music also adds impact to the Ladybug’s wistful recollections of his lost family. Early in the film, as a young bug, he gets separated from his parents and siblings, and in two brief recollections afterward our 6-year-old was in tears feeling bad for him.

This is film kids will appreciate for the story and mom and dad can enjoy for its beauty and the brilliant way it tells a story without words.

I’ve spent a lot of space warning about how some particularly sensitive or very young children will find the tension troubling, but overall this is quite the gentle movie. Our family really enjoyed it, even with the tense moments.

Americans who subscribe to Amazon Prime can watch it for free.

What is hate speech, and why should we be leery of banning it? (5 minutes) Most everyone agrees that some sorts of speech need to be limited, with th...

Manure into mattresses – we can "create" resources

Solomon did not have a web page. He didn’t blog. He didn’t tweet. He wasn’t on on Snap Chat or Instagram. But he can still help you navigate the...