Indoctrination: Public Schools and the Decline of Christianity in America 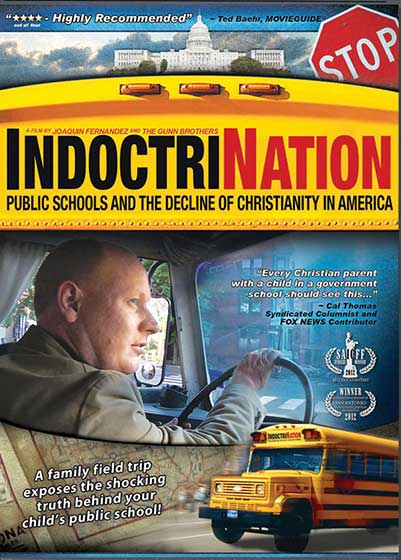 LaVerdiere is a Christian who has a hard time reconciling her job with her faith – she doesn’t know if she should be making parents feel good about sending their children to a public school. At about the 26-minute mark LaVerdiere is asked, “How long would your career last, if were to start teaching Scripture from the front of the classroom?” Laughing, she answers, “I’d probably be out of here that day!

Those were prophetic words.

An hour further into Indoctrination we meet her again. Since her first interview, LaVerdiere had decided that she could not remain silent about God in the classroom, so she’d offered her resignation. She was initially supposed to teach another two weeks, but after she wrote a letter, at her principal’s request, explaining her decision, she was asked to resign immediately. What was in her letter? LaVerdiere noted that she could not continue to teach where Christianity was not welcome, and where homosexuals, radical environmentalists and atheists were encouraged to pervert the minds of the students. When the principal saw her letter LaVerdiere was asked to resign that same day. And she was escorted out of the school like a criminal:

“I did return to the elementary school that day. And the principal supervised me as I cleaned out my classroom. They has the students go on a back playground and they had me go around a different way than I normally do so that the students could not see me while they were on the playground… when all I had done was tell my students I was leaving because I was a Christian.”

That, in a nutshell, summarizes the state of public education in America: it is at war with Christianity.

There is much more in this documentary. The narrative for the film is the Gunn family’s trip, in a big yellow school bus, across America. They travel from place to place visiting educational experts and Reformed theologians, and uncover the radically anti-Christian roots of public education. It is no accident that God is now unwelcome in the classroom. As Gunn shows, for many of the most pivotal figures in educational history, that was the plan from the beginning.

In addition to the specifically Reformed influence in this film, another attractive feature is the filmmaker and narrator, Colin Gunn. His Scottish accent is charming and I can’t imagine a more pleasant voice to listen to as the dire and dour state of public education is explained. Then add in clever animated illustrations and engaging interviewees, and this is as enjoyable as it is educational.

While the focus here is on the US public system, Indoctrination is highly relevant to Canadians as well, as this is an exploration of the public education philosophy that pervades schools on both sides of the border.

To sum up, this is not only a great production it is a very important one too!

Teaching your kid to appreciate broccoli

or, Cooking up a recipe for contentment ***** One of the most common complaints I hear from other parents is how they have been unable to get their ...