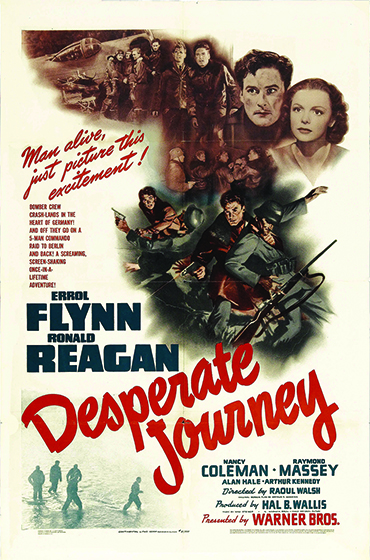 Ronald Reagan and Errol Flynn are two members of an Allied bombing crew assigned a near-impossible mission over Nazi Germany. When their plane is shot down, they set out to make it home again….and to do as much damage to the Nazis as they can along the way.

Their desperate journey has plenty of explosions, fisticuffs, arial shootouts, guns blazing, and, at one point, Errol Flynn diving through a window to tackle two Nazi guards at once. There are laughs too, especially when the crew has the chutzpah to steal a ride on Nazi leader Hermann Göring’s private train car.

Desperate Journey is jingoistic, and at times not so realistic (ie. the real Nazis were smarter than movie Nazis) but it has an authenticity to it that comes of being made during World War II. This film was part of the war effort, made to encourage those back home that not only were we in the right, but that Australians, Brits, Americans and more could come together as a team to outsmart and beat back the Nazis.

As the crew is chased across Germany it isn’t surprising that there are casualties along the way. And while there is no real gore, those losses make this a film that children could find too dramatic and emotional for them to deal with. So this might be best for 12 and up.

I watched this with a group ranging in age from 40 to just shy of 80, and all eight of us enjoyed it. If you have any sort of appreciation for World War II films made during World War II, this is one of the especially fun ones.

Only downside? It only seems to be available on DVD right now, with no streaming options.

Letters Along The Way, from a Senior Saint to a Junior Saint