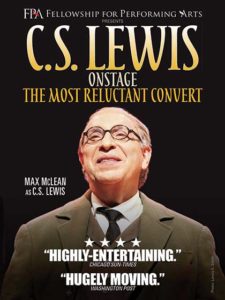 Imagine having the opportunity to go back in time and visit with C.S. Lewis, and not just at the local Eagle and Child Pub, but in his home, the Kilns, sitting across from him amongst his books and papers as he pulled on his pipe and shared thoughts from his latest literary efforts.

If that idea excites you, then you are in for such a treat! Max McLean’s one-man theatre production, C.S. Lewis Onstage is still touring across North America, but a filmed version of the show is available on DVD and streaming online. Mclean is Lewis, and we are his guests as Lewis recounts the story of his conversion. He shares how he rejected God as a school boy, and grew more adamant as a young man. He voices the atheistic arguments he relied on – arguments that are still in use today. But, as Lewis explains to us, if one wishes to remain an atheist, you can never be too careful about your reading. God used the talents of a diverse cast of writers to bring this prodigal back, from George MacDonald to G.K. Chesterton, and Tolkien too. Lewis explains how he was drawn back in stages, and only bent his knee because he couldn’t do anything else. His was a grudging bow; he was “the most reluctant convert.”

I absolutely love this film, but I can also see how this would be dreadfully dull for anyone who isn’t already a fan of Lewis’ non-fiction. It is, after all, just a man talking and talking and talking. I should also admit that as much as I enjoyed this, I also fell asleep several times as I made my way through it. That was due in part to the complete lack of action (no explosions here to wake me back up again), to the charming but decidedly calm manner of the man himself, and due also to the demand the film put on my brain – it requires complete attentiveness or else you just won’t follow the train of thought Lewis is laying out.

However, even if it did get me nodding, each time I started watching again I rewound to long before I winked out. I wanted to make sure I hadn’t missed a bit of it. This really is something to savor…even if that savoring should be done in chunks, spread out over a few nights.

As to cautions, I can’t think of any. Lewis was no 5-point Calvinist, but his conversion story makes him sound almost like one: the account he shares is of God grabbing hold of him. Lewis takes no credit for it himself.

So, who’d love this? Well, if you don’t already know Lewis, this is not a good way to first get introduced – it’d be overwhelming, which might well make it seem boring.

But for anyone who wishes they’d had the chance to meet Lewis, well, this is the next best thing!

You can watch it for free at Redeem TV here, though you do have to sign up for an account. There is also now a fully realized film version that is even better, also starring Max Mclean. You can find our review of that film, C.S. Lewis: The Most Reluctant Convert, here.

Paleontologists believe they have discovered a nearly fully preserved “dinosaur mummy” while on a scouting trip in Dinosaur Provincial Park, north...

Children's games that mom & dad can play without going batty