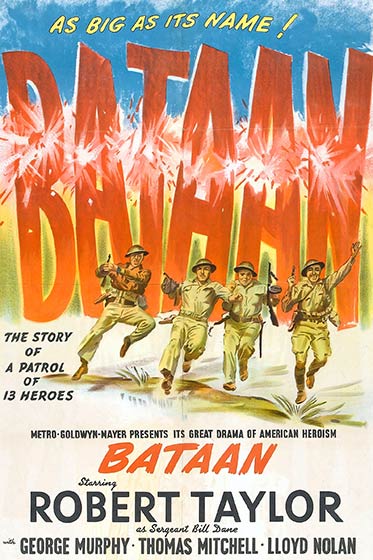 This is a movie unlike any other you will ever see.

In the early months of 1942, Japan launched an attack on the Philippines and, over the course of three months, they drove General Douglas MacArthur and his American forces right off of the islands.

Bataan is set during that retreat. A group of 13 men are assigned the task of blowing up a key bridge after the Allies cross it, and before the Japanese reach it. The 13 are castoffs and strangers to one another. In all the fighting they’d become separated from their original units. But now they’d been asked to come together and delay the Japanese advance for as long as they could.

The motley nature of this crew makes for some solid character-driven action but what makes this film so very unusual and exceptional is when it was shot. America had been forced out of the Philippine Islands, and those wounds still stung. This was not the seemingly invincible America that we know today, but was instead America the bloodied. It would still be a year’s time before the US returned to the Philippines, and for Bataan’s audience it was far from clear what the outcome of the war would be. The typical war film is about men facing incredible odds and eventually winning. They couldn’t do that in Bataan, because it was about a battle the US lost. So, instead, Bataan was made as a pledge to honor the courage and sacrifice of men who died never knowing if victory would even happen.

The result is an emotional rollercoaster that keeps your attention right to the very end.

There is a lot of fighting in Bataan. And right from the opening – with the Japanese dropping bombs on the retreating columns of soldiers, Filipino families, and the wounded – there are a lot of people being killed. However there is very little blood. In the 1940s directors didn’t feel the need to make things hyper-realistic, or depict killing blows in slow motion, so, compared to today’s gore-fests Bataan isn’t going to disturb adults.

But the sheer volume of killing makes this a film unsuitable for the very young.

This is one of the most memorable, and certainly the most unique World War II film I’ve ever seen. I’d recommend this for guys who have the patience to appreciate black and white films and who have an interest in learning about World War II from the films of the time.

Why free trade is win-win So long as two people make an exchange voluntarily, it's going to be win-win. If I trade $10,000 for your used Volkswagon B...

Conversion therapy and silence in Canada

Many concerned readers will remember the federal government of Canada’s effort to ban conversion therapy throughout 2021. The Liberals began their e...

The Runner from Ravenshead

Children's film 81 minutes / 2010 Rating: 7/10 Both the charm and the kitsch of this film come from the producers' decision to fill all the roles...