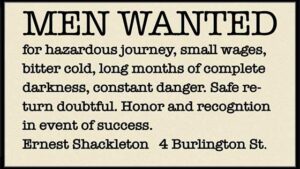 THE APPEAL IS REAL: This ad may not be genuine, but it’s still been ranked among the best ads of all time. In 1900, British explorer Ernest Shackleton was said to have posted this in London’s The Times newspaper to recruit crew for his 1901 expedition to the Antarctic. The appeal is certainly real: it recognizes that there are things more important than money and a comfortable life. (It misunderstands that the “more important” isn’t fame or honor.)

When I started my undergraduate studies at university, I was on track to become a history teacher. It didn’t take long before I fell off that track.

I’m not alone. The feature article in the Nov/Dec 2022 issue includes an encouraging statistic: based on surveys of grade 11 and 12 students that were done in 2019 and 2021 in Reformed Christian schools, about 40 percent of students considered teaching as a career. Yet good intentions don’t necessarily translate into reality. Reformed schools are reporting that the number of qualified applicants that they are receiving dropped from an already-poor 1.2 applications per opening in 2020 to a dismal 0.76 in 2021. Ouch.

Canadian businesses are feeling the pinch of a worker shortage this year. But this is nothing new for Reformed schools, which have struggled with a lack of teachers for years now.

With many different school communities all operating independently across a huge country, it seemed to the editorial team at Reformed Perspective that the issue of teaching and teacher shortages would benefit from some investigative research and extensive coverage.

Listening to the thirteen individuals who graciously shared their insights with me as I worked on the feature article, I began to see a theme arise:

What is “kingdom work”?

These perspectives challenged me to consider some terms that get thrown around but are rarely defined. Is teaching a calling? A ministry? Kingdom work? Which careers do these terms apply to? Only pastors? The mission statements of Reformed schools make it clear that a teacher’s role is deeply spiritual in nature. But isn’t it dualism to elevate spiritual missions over physical or practical ones? Our Reformed heritage is hesitant to distinguish some professions as “callings” when we know that every task and job can be a means through which we honour God and further His kingdom.

I have seen first hand how Christians can faithfully serve in God’s kingdom in many different realms and careers. My dad was a plumber all his life who has blessed countless families (including my own) with his skills and services. A school can’t stay open without plumbing! The same is true of my mom, who cared for our family of ten her whole adult life, never making a penny from her hard work. Likewise, I have seen very honourable people who were motivated to expand their business for financial gain. But their motivation was not selfish. It was for God’s kingdom. Because of their kingdom hearts, I can get paid a salary to work for Reformed Perspective, and many other worthy causes are given the means to exist.

Does teaching belong in a special category when it comes to importance in the Christian community?

We need more, but not just any

Well, next to parents, teachers often have the most influence on our lives. Pastors have commented that they notice the difference of serving in a congregation where the youth attend a Reformed school or not. Where they don’t, the students are further behind when it comes to their understanding of biblical truths. Because of this great responsibility, it is appropriate that the apostle James reminds us that “Not many of you should become teachers, my brothers, for you know that we who teach will be judged with greater strictness” (James 3:1). Yet alongside this warning, the entire Old and New Testaments include a consistent and frequent calling to teach.

But simply being a teacher (or a pastor, or a stay-at-home mom) doesn’t make someone a kingdom worker either. The role has to be filled with someone who actually uses it to further God’s kingdom and glory. We have likely all seen examples of where a pastor, teacher, or stay-at-home mom can cause great harm to God’s kingdom and glory. However honourable the intentions are with starting a Reformed Christian school, that doesn’t mean that what happens inside is going to be kingdom work.

Who we serve, not just where

The key, then, to whether we are doing kingdom work, is that wherever we serve, we do so “seeking first His kingdom and His righteousness” (Matthew 6:33).

Each of us has to make decisions every day again to put God and His kingdom first. That applies to deciding which career to pursue, as well as how to actually fulfill the vocation we have been given. We can move forward with confidence, trusting that God will take care of us.

In regard to the current teacher shortage, the feature article makes the problem and some potential solutions clear. What we now need is a willingness from some of God’s children to step up for service:

When it comes to our choices for careers and how we spend our finances, Reformed Christians have to be mindful of the temptation to be too careful, looking out for ourselves rather than trusting God to provide. As Kevin DeYoung says so well in his book Just Do Something:

“We should stop looking for God to reveal the future to us and remove all risk from our lives. We should start looking to God – His character and His promises – and thereby have confidence to take risks for His name’s sake.”

Speaking for myself, if some of the strategies that are being pursued by the Teach With Us Canada team (see the feature article in the Nov/Dec issue) were in place twenty years ago, I may well have stayed on track and been serving as a teacher today. Yet I’m grateful that the LORD has many places for us to serve, as long as we do so for His kingdom and glory.

“To those who by persistence in doing good seek glory, honor and immortality, he will give eternal life.” – Romans 2:7

Mark Penninga is the Executive Director of Reformed Perspective. This first appeared in the Nov/Dec 2022 issue.

The Revolt: a novel in Wycliffe's England

by Douglas Bond 269 pages /  2016 I was never a fan of Church history in school, but I've come to realize that this was really the textbook's...