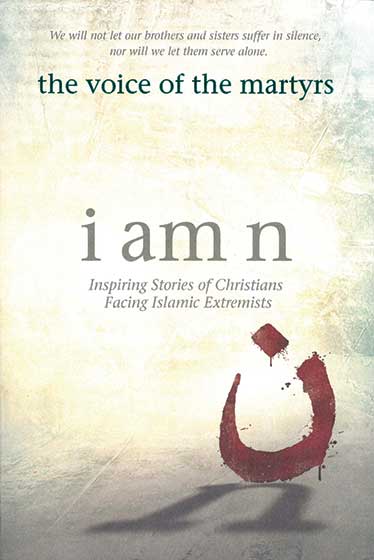 The “n” in the title is Arabic shorthand for “Christian,” and Islamic extremists will paint it on houses owned by Christians as a means of intimidation. It is, in some places, the equivalent of being marked for death.

This was a very different and much better book than I thought it would be. I was anticipating something hard to endure: story after story of Christians getting beat up, beheaded, or jailed. I started reading only because I knew the topic was important. As the front cover puts it, we must “not let our brothers and sisters suffer in silence, nor…let them serve alone.”

So I started reading out of a feeling of duty.

However, I kept reading because I am n is encouraging, and challenging, and just too awe-inducing to put down.

It was encouraging to see what God is up to in the  Islamic East, even in the midst of severe persecution. As one story details, before 1983 Christianity was almost unknown in Algeria. There were “no Christian bookstores, no indigenous churches, and virtually no access to Bibles.” But then a few Christian tourists invited the locals to play a soccer game. The invitation was declined because the local team’s best player was sick. These Christians then asked if they could come pray over the young man, and they were allowed to do so. The next day the young man was fully recovered and able to play in the soccer game. News of his healing quickly got around, and these tourists, while not missionaries, were very happy to answer the many questions that came their way. While they eventually had to go back home, the gospel news they shared stayed behind.

“I felt that the stories they told were not just stories, but real,” recalled Hassan. “It made we want to leave everything and follow Jesus.” Hassan and other Algerians began turning to the God of the Bible. The “soccer miracle” is credited with initiating an explosion of faith in a country where Christianity was once rare.

With the growth in numbers also came a growth in persecution – it is not easy to be a Christian in Algeria. But what a wonder to hear about how God can gather a people for Himself using even a soccer game.

There are many other encouraging stories throughout. In chapter 43 we learn about Alejandro, from the Philippines, who was “a cold-blooded killer, a terrorist for Allah” before turning to God and becoming a pastor. And as remarkable a turnaround as his life is, God wasn’t done with the amazing.

“During the final evening of [a bible] conference, Alejandro conversed deeply with an attendee grieving the lost of relatives – a pastor, his wife, and children – who had been killed by Muslim militants several months earlier. Only God could bring together a former Muslim murderer of Christians to comfort and pray for believers who were suffering at the hands of Islamic extremists.

Now, it was challenging to read story after story of Christians who lost everything: their businesses, their homes, their friends, their family connections, even their own lives, or those of their children or spouses. They gave this all up because they understood that what they were losing paled in comparison to what they have in Jesus their Lord.

In a section of the book titled ” JOY” we meet Jon, a Malaysian Christian, who was able to laugh as he was beaten, expressing the joy he felt “for the honor he was feeling. ‘I was okay with being beaten,’ he recall. ‘They beat Jesus too.'”

Then, in the next chapter there is Musa, a North African who was able, for a long time, to be a quiet Christian. He wasn’t sure what he would do if he was confronted about God. But then the moment came: one of his coworkers wanted to know why he didn’t take a break with them to go do their prayers.

“Musa realized. This is it. This was the moment he had to decide if he was for Christ or against him. A phony or the real deal. All in or all out. After a long pause, he looked his friend in the eye. ‘Prayer,’ he began, ‘is an intimate conversation with God, and it should be done all the time, in my heart, rather than at specific times using the same phrases and postures.'”

This is a world away, but a situation we can understand. We have co-workers too, who ask us questions. But the stakes aren’t nearly so high for us. Musa knew he faced the loss of his job, and even the loss of his family just by making it known he follows Jesus. But still he professed his Lord.

Why then am I so slow to speak the name of my Savior? Why don’t we profess God’s name loudly and constantly? This is the challenge that I am n throws at western Christians. We have so much, and we risk so little. Why are we so quiet? What do these persecuted Christians understand about God that we still don’t?

They know that God is all. While we can get distracted by the abundance around us, they often times have nothing but God. And they know He is more than enough!

When it comes to cautions, I can think of some minor quibbles. Mention is made of how The Jesus Film was used as an evangelistic tool. Visually depicting Jesus, and having an actor portray Him is not something we would do. But we also know that God can use even bent sticks to draw straight lines.

At another point a new convert refers to himself as becoming a “son” (rather than brother) of Christ. But we should expect new converts to have some misunderstandings.

Finally, there are many descriptions of persecution, but none are graphic.

I am n is a book to delight in, pray over and pass along to others. The 300 pages are broken down into 54 chapters with 48 of the accounts from the present day, and another half dozen from the pages of Church history. The short accounts make this a very easy read, and while many atrocities are described, it is always done delicately, so this may be appropriate for children as young as 10.

The front cover subtitle has made this a controversial book. It reads “Inspiring Stories of Christians Facing Islamic Extremists.” Yes, most of the persecution Christians face around the world is at the hand of Muslim radicals. That is not a fact that many want to acknowledge, but when we ignore it, we do so at the expense of the Christians suffering at their hands. No, not all Muslims are violent and no one is saying they are. No one is calling on us to hate Muslims. This is, in fact, a book full of Muslims who have been brought to God through the love of their Christian neighbors and family. So yes, this is an account of the Muslim persecution of Christians, but it is also an account of how that persecution should best be met: by loving our enemies and praying for those who persecute the body of Christ.” (Matt. 5:44).

I am heading out to an abortion protest in a couple days, and after reading this, I am not nearly so intimidated as I might have been. It is indeed an honor to face persecution for the sake of God.

This review first appeared on the Dykstra book blog www.ReallyGoodReads.com.

20 Scriptures to guide our online speech

May God give us the humility to recognize how our online speech may be out of step with his calling on our lives ***** Scripture has a lot to say ab...