Several years ago, Kate Beckinsale was conned into signing a movie contract that required nudity—something she didn’t want to do. With her acting career in jeopardy, she found herself browbeaten by the director. At long last, she gave in to intimidation and performed the nude scene, which made her feel, as she put it, “violated and horrible.” Afterwards, she secretly urinated in the director’s thermos in revenge.

In more recent history, Jennifer Lawrence wrestled with inner turmoil while filming her first sex scene (for the sci-fi movie Passengers). During an actress roundtable” for The Hollywood Reporter, Lawrence described the experience: 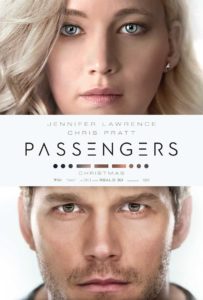 I got really, really drunk. But then that led to more anxiety when I got home because I was like, “What have I done? I don’t know.” And he was married. And it was going to be my first time kissing a married man, and guilt is the worst feeling in your stomach. And I knew it was my job, but I couldn’t tell my stomach that. So I called my mom, and I was like, “Will you just tell me it’s OK?”

Notice three sobering facts about Lawrence’s experience. First, she battled anxiety before and after filming the scene. Second, she felt intense guilt for sexually acting out with a married man. Third, she tried several coping mechanisms to eliminate her distress: alcohol (which only made things worse), telling herself everything was okay, and asking for consolation. 1

Would you believe me if I told you that stories like these are numerous? Sadly, it’s true. The amount of pressure and intimidation Hollywood places on actors – especially women – to undress and sexually act out for the camera is commonplace. When asked about sex scenes, celebrities often reply with something like, “We’re actors; it’s a part of the job.” Indeed, those who want to make it as an actor won’t be taken seriously if they have qualms about nudity and bed scenes.

The movers and shakers in Hollywood have acquired what seems to be an almost limitless amount of power to enforce the sexualization of actors. To cite one more example (this time from the world of television): director Neil Marshall once commented on how he was pressured by an HBO executive to put more sex and nudity in an episode of Game of Thrones:

Notice the implicit acknowledgement that the nudity had nothing to do with art – that it was designed solely for the satisfaction of a perverted audience base. The producer pushed his weight around, and the director (and everyone else) acquiesced. All of this to appeal to the lowest common denominator.

What gives entertainment executives the authority to force others into such compromising situations? What gives a producer the power to manipulate a director into catering to perverse fantasies? What gives a director the right to coerce an actress into agreeing to do more than she meant to?

If this page was a mirror, you would be looking at the answer.

You see, when average folks like you and me support films and TV shows like these, we are perpetuating the sexualized culture we say we deplore. My guess is that, because it’s often hard to see how “A” eventually leads to “X,” we think little of doing “A,” even if we abhor “X.” We may complain about the objectification of women (and men) in our culture. We may complain about how movies are ruined by sex scenes and gratuitous nudity. But if we then turn around and financially support that culture, something is askew.

It doesn’t matter if you avert your eyes during sex scenes – at the end of the day, studios care about profit margins. That being the case, prudes and perverts give equal support for a film when they buy a movie ticket or purchase a DVD. The truth is, if people stopped financially supporting the abuse of actors, the industry would change. But producers follow the money, and there’s money to be made through the objectification of entertainers. As one acquaintance of mine with ties to Hollywood once put it in a Facebook discussion:

I know how many of the women in these scenes (and probably men too, you just don’t hear from them) have talked about throwing up in the bathroom between scenes, crying, stressing out constantly, etc. So basically, I’m paying for that person to do that for me? …. There are perhaps no handcuffs involved with these performers, but social constraints/expectations/demands/culture can be equally, if not more, powerful. And that’s the problem. I’ve lived in Hollywood. I’ve worked with prostitutes one on one. The line between the two worlds is thin. I know no other culture more willing to use people and throw them away.

Consider also that plenty of actors in the entertainment industry are not professing believers. They do not subscribe to a Christian sexual ethic. Still, their consciences bother them when it comes to nudity and sex scenes. Yet most moviegoers, including many professing believers, say their consciences are clear when they watch the consciences of others be violated – for entertainment, no less. They pay for actors to be abused or debased and experience no qualms about it.

In contrast, Paul calls Christians to give up their rights if it means hurting the conscience of others (see 1 Corinthians 9 and Romans 14). We have it backwards: we participate in the violation of others’ dignity so we can benefit from their moral and emotional compromises. Granted, the context of Paul’s teaching on this matter is the relationship between members of the church, but I don’t think that gives us an excuse to disregard the wellbeing of unbelievers.

As patrons of Hollywood, our pursuit of personal freedom has hijacked our ability to consider the needs of others. We have adopted a consumeristic mindset that disregards most every other factor in favor of us having a positive, cathartic experience. If the story is interesting enough, and if it “demands” the objectification and dehumanization of actors, then the needs of the story win out.

Brothers and sisters, this should not be!

What about actors who undress willingly?

Now, it is true that some actors do sex and/or nude scenes willingly, with little or no manipulation involved. Even so, that shouldn’t be of supreme importance to people of faith. Not if we take seriously God’s command to love our neighbor as ourselves.

With this command in mind, whether or not actors agree with the nudity and sex acts required of them is actually beside the point. Why? Because it doesn’t negate the fact that they are being objectified and degraded as human beings in what is essentially a pornographic act.2 It is unloving of us as Christians to support such actions, even when they are free from coercion.

We see this principle at work in Romans 13, which says loving your neighbor includes avoiding adultery. The point is not that all adultery is rape. Some adultery – much of it, in fact– takes place by mutual consent. Does that suddenly make the adultery excusable? Not according to Scripture. By its nature, sexual perversion is sin, even if it takes place between consenting adults.

All forms of immorality are inherently unloving. That’s the Bible’s stance. That should be the Christian’s stance. In contrast to this, the film industry has created a socially acceptable ménage à trois: two actors commit sexually intimate acts, and audiences sit in on the proceedings with complete approval.

The law of love

What finally opened my eyes to this culture of sexual abuse was Wayne A. Wilson’s book Worldly Amusements. Wilson himself became aware of the issue after watching a movie in which the director had his own daughter perform sex acts on screen.

The fact that a director would sacrifice his child’s dignity for the sake of a movie changed Wilson’s perspective. He now implements what he calls the “law of love” in his movie watching habits: he refuses to support films that sexually objectify or degrade actors. He now asks himself, “Would I approve if my sister [or wife or daughter] were asked to behave or expose herself in any way that undermined her purity?”

It is a question we would do well to ask ourselves. This law of love exhorts us to consider the spiritual, emotional, and physical needs of men and women in front of the camera. Is that restricting for a movie-going audience? I suppose so. It has definitely kept me from visiting the theater on several occasions where I otherwise would have willingly and excitedly done so.

But this law of love is not “restricting” in a lastingly negative sense any more than monogamy is a negative restriction for married couples. It’s a law that protects, not harms. It’s a law that governs for good, not evil. It’s a law that helps one cultivate the greatest motive known to humankind. In the end, what is truly more freeing: living a self-centered or an others-centered life? The Bible’s answer is the latter.

Think about the implications here. How would it affect you if you put the law of love into practice? What if you refused to financially support movies that objectified actors because you wanted to treat them with the humanity they deserve? Would you not start viewing the actors you encounter in the movies as real people and not just potential sources of eye candy or gratification? Would the law of love not help you fight sexual lust even more effectively with gospel power? Would it not help you keep from focusing on yourself (which is what lust does) and instead focus on the needs of others (which is what a healthy, Biblically-informed sexuality is all about)? Would that not be a gloriously countercultural way to demonstrate God’s love to your fellow human beings?

I think it would. In fact, my personal experience has been that it does. I dare you (in the most positive sense possible) to prove me wrong.

1 For a more in-depth treatment, see “A Tale of Two Sexual Assaults on Jennifer Lawrence” at CapStewart.com

Cap Stewart blogs about movies and the arts at CapStewart.com. This article first appeared in the Jan/Feb 2017 issue.

Greg Bahnsen on presuppositional apologetics and circular reasoning (4 minutes) Lots to chew on in this short 4-minute video. While it isn't for ever...