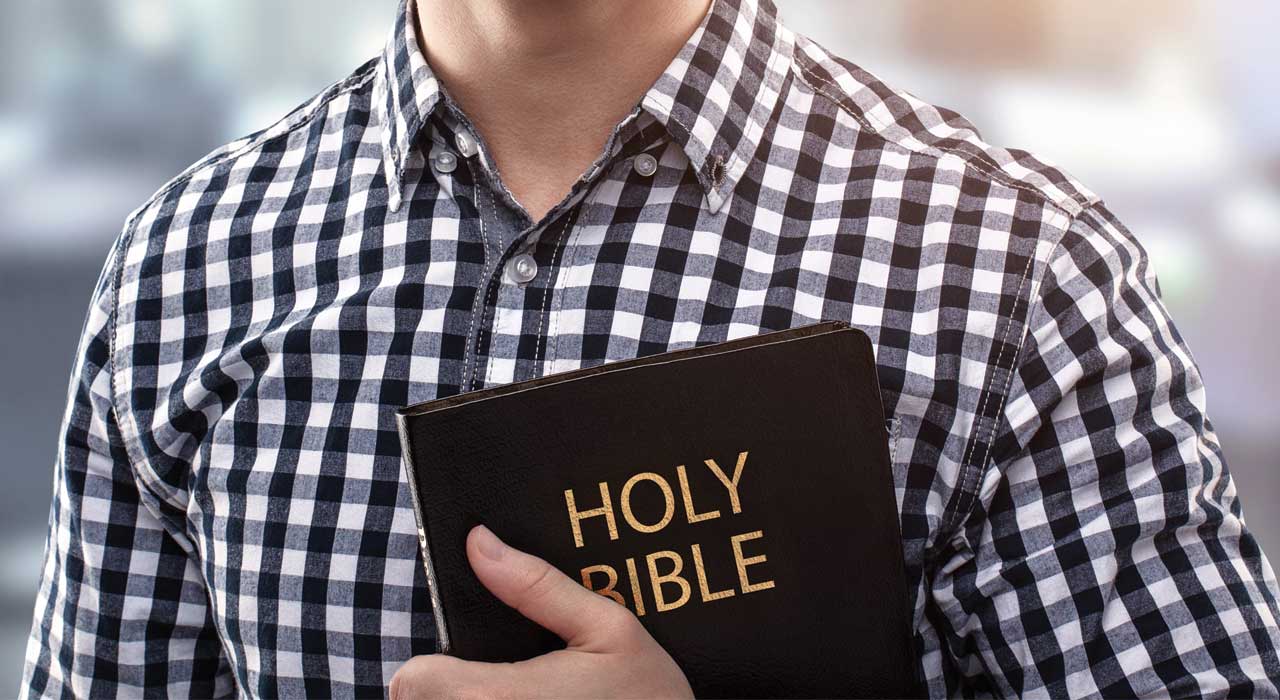 Our leaders, and neighbors, need to hear God’s Word from us

God’s Word cuts. We acknowledge that is “living and active, sharper than any two-edged sword” (Heb. 4:12). It may even be that it’s because we know it can have such strong and contrasting reactions that we don’t often hear God’s Word directly referenced or quoted, even by Christians, in our work places, the mainstream media, our legislatures and courts, or other places in the public square.

Ready reasons come to mind for our silence. “I’m just a grandma / just a laborer / just a teen / just a _______ [fill in the blank].” Or, “I’m not gifted with words.” When it comes to speaking God’s Word to the world, we might like to leave this job to our pastors, missionaries, or maybe people who get paid to bring a Christian perspective to our secular leaders. Another common hurdle is our concern of throwing the pearl of the Gospel before the secular swine, resulting in a mess we would rather avoid.

Nothing new under the sun

So God’s Word is generally excluded from the public square, and not by governmental dictate, but by Christians’ own reluctance to speak it.

What might happen if we decided again to speak God’s Word out loud, in public discussion and debate? Well, we can’t control how our neighbors will respond to God’s Word, but we can have a hand in determining whether they are even exposed to it.

Two remarkable Old Testament stories illustrate this well, and serve as good lessons for today. They feature two kings of Judah who lived shortly before the kingdom was conquered and the people exiled to Babylon.

A king with ears to hear

When we think of righteous kings, David and Solomon often come to mind. But neither compared with Josiah.

When Josiah was 18, he made orders to make repairs to the temple. Then something strange happened. Apparently when renovating the temple, Hilkiah the high priest found the Book of the Law. He proceeded to give it to the king’s secretary, who passed it on to the king with these rather uninspiring words “Hilkiah the priest has given me a book.” I call this strange because it suggests that the Book of the Law was lost and forgotten – even by the high priest and in the temple! What does it say of the spiritual health of the covenant nation of Judah when the Book of the Law is forgotten? There may have be a form of spirituality in the land, but clearly there was little faithfulness.

When Josiah heard the words of the law, it struck him to the heart. He immediately tore his cloths and asked the priest, and others, to inquire of the LORD, recognizing that he and the people had not been faithful. After hearing God’s response of judgment and grace, Josiah demonstrated true leadership. He gathered all the people together and “he read in their hearing all the words of the Book of the Covenant that had been found in the house of the LORD” (2 Kings 23:2). He then covenanted before the LORD, “and all the people joined in the covenant” (23:3).

These were not just words and good intentions. In the following weeks, Josiah proceeded to reform the entire nation. He destroyed the idols, broke down the houses of the cult prostitutes, eradicated child sacrifices, and went from place to place removing the high places and shrines. After this he commanded the people to celebrate the Passover, “for no such Passover had been kept since the days of the judges who judged Israel or the of the kings of Israel or of the kings of Judah (23:22).

Based on what we know of Josiah, it seems he stayed faithful in his leadership till he died in battle.

A king who loved darkness rather than the Light

As was so often the case with the kings of Israel and Judah, a faithful father did not at all mean a faithful son. Josiah had a son named Jehoiakim, who became king after his younger brother Jehoahaz’s very short three-month reign ended in captivity. Jehoiakim had no use for God’s Law or his father’s reforms. Rabbinical literature describes him as a very evil man, guilty of much incest, murder, and adultery.

But for those familiar with the Bible, most of us will better know Jehoiakim as the king who burned God’s Word, as recounted by the prophet Jeremiah.

God instructed Jeremiah to write down all the words that He had told him. He added “It may be that the house of Judah will hear all the disaster that I intend to do to them, so that every one may turn from his evil way, and that I may forgive their iniquity and their sin” (Jeremiah 36:3). Through his scribe Baruch, Jeremiah wrote all the words down on a scroll. Since he was banned from going to the temple, Jeremiah had Baruch go there instead, and he read God’s Word to the people. Word made its way to the government officials, and Baruch was ordered to take his scroll and read it to them. God’s Word filled them with fear and they decided “we must report all these words to the king” (36:16).

Eventually king Jehoiakim had the scroll read to him. When he would hear three or four columns “the king would cut them off with a knife and throw them in the fire in the fire pot, until the entire scroll was consumed in the fire” (36:23). Unlike his father Josiah’s response to the finding of the law, Jehoiakim was not fearful or repentant. Rather he ordered that Baruch and Jeremiah be captured.

Western society today likes to be nice. We are known for wanting to avoid controversy. Christians aren’t immune to these societal trends. We generally don’t like to rock the boat of culture. And citing Scripture tends to do just that. It is one thing to quote the Bible at a Bible study or in the privacy of our home. It is another to bring it to our civil leaders, our business associates, or community friends.

The temptation we all face is to avoid using Scripture in public discourse. Out of a desire to reach a secular and pluralist audience, we stick to language that doesn’t turn people off. There are indeed times when it is appropriate to communicate biblical truth in a way that our neighbors will listen. If we don’t know who our readers or listeners are, there can be wisdom in not triggering them before our point is made. For example, a hardened atheist or jaded ex-Christian may read our letter to the editor, see a reference to Scripture, and immediately stop reading. If it is possible to communicate the same truth without directly quoting Scripture, there may be wisdom in doing so.

There are also times when we simply are not the gate-keepers of communication. If we know that those gate-keepers will not allow their publication to become a forum to communicate Scripture, there again may be wisdom in putting that Scripture into our own words. For example, when staff from the organization I work for contribute articles to large secular newspapers for publishing, we have learned that Scripture may not be welcomed. If we want to still get published, we have to show some creativity. But that said, we may be surprised by a new generation that is far more open to considering a faith-based perspective than their baby-boomer parents.

Whether it is through direct quotations, or by means of rephrasing it to be appropriate for the context, the bottom line is that the communication of Scripture is not only still acceptable, it is absolutely necessary. We know that hearts are changed by the Holy Spirit through the Word. And it is our job to communicate that Scripture. Lord’s Day 12 of the Heidelberg Catechism asks what it means that we are called Christians. We confess that it means we carry the three-fold office of Christ: Prophet, Priest, and King. That means that every Christian is called to “confess His Name.” Prophets carry the words of God to those who need to hear it. This country is full of people who need to hear God’s truth. This isn’t a job we can pass off. It is an integral part of the job description of every Christian.

We don’t know whether the person we speak to will respond like Josiah or Jehoiakim. But changing hearts is not our job. It is God’s. God calls us to be His agents. We really are modern-day prophets.

None of us can do this well in our own strength. Let us constantly pray to “set a guard, O LORD, over my mouth, keep watch over the door of my lips” (Psalm 141:3)! We can also ask God to open our eyes to see opportunities to testify to Him, and embolden us to seize those opportunities while we still have them.

As with many difficult things, the best way to learn is by simply trying, and not giving up. Let’s encourage each other to shine the light of God’s Word across our nation.

Mark Penninga is the executive director of ARPA Canada.

Although we need God’s Word shared, it is also important to remember that the way we share it should reflect the grace and truth that Christ exemplified. There are two common and related mistakes to avoid.

First, simply because we quote Scripture does not mean that we are in the right. The Pharisees knew Scripture well, and quoted it endlessly. But they lost perspective and didn’t recognize God Incarnate, right in front of them. If we are wrong, or simply misguided, adding a Bible text doesn’t change that. In fact, it can reflect very poorly on Christ Himself.

Second, even if we are communicating truth, if it doesn’t come alongside grace it isn’t faithfully representing Christ. Christ never communicated truth without grace, just as He never communicated grace without truth. We humans naturally don’t do that. Some of us tend to want to always get to the truth of the matter. And people get hurt in the process. Others emphasize grace, and compromise truth in the process. There are no shortage of examples of Christians who throw out Bible texts in their letters and meetings, while showing little love and grace to those who they are addressing. We need to realize that the person we are speaking with likely does not share our belief about the authority of God’s Word, nor do they understand its context. And this will be compounded if we never actually meet (e.g. if our communication is written).

Put ourselves in the shoes of our readers. What happens when we hear a Muslim referencing the Koran and urging the West to submit to Mohammed? Not only do we disagree, we end up not listening to anything else they say. We write them off. So it is so important that our communication makes it clear that we too have to measure up, and we too struggle and fail when trying to do so. God’s Word is for us as much as it is for the people we are addressing. Truth without grace and love is a clanging gong. This world doesn’t need more noise. 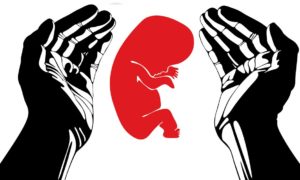 Sanctuary cities for the unborn? 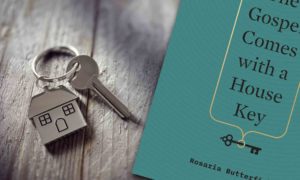 The Gospel Comes With a House Key: an instructive, inspiring, downright intimidating look at Christian hospitality