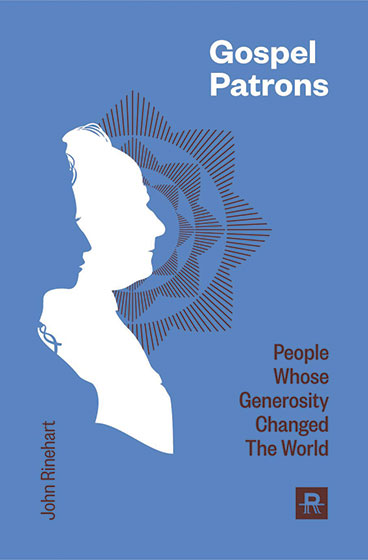 Are you a giant?

Church history is full of such people. William Tyndale translated the Bible into English. George Whitefield was used by God to spark the Great Awakening, while John Newton was the ex-slave trader who wrote Amazing Grace and helped William Wilberforce end the British slave trade. These were Christian giants; their stories well known.

But, as author John Rinehart notes, not all of us are called to these leadership positions. Many are called to supporting roles. In Gospel Patrons Rinehart tells the stories of three people who enabled Tyndale, Whitefield, and John Newton to do their work.

Their stories are not well known, but their roles were vital too. Most of us are not giants like Tyndale, Whitefield, and Newton, and we might think that we don’t have the funds to act like Monmouth, Lady Huntingdon or Thornton either.

But while few of us have the funds they did, most of us are in a position where we can spare money or time to support worthy causes. In sharing these three biographies, what author John Rinehart wants us to realize is the importance of this supporting role. God has a part for each of us to play. And if we understand how important the “lesser” roles are, perhaps we will more willingly take them on, sacrificially donating our money and our time.

If I were to offer one critique, it would be on the topic that Gospel Patrons doesn’t tackle: making sure that who you give to is going to use your money to good ends. Christians need to be generous and discerning. That said, this is a short book with a tight focus – to encourage and inspire Christians to be generous – so maybe discernment in giving is a topic for a different book.

Meanwhile, Gospel Patrons is a very readable, very challenging, and much-needed book. I highly recommend it for all ages.

If you want to get a flavor of this “gospel patron” idea, author John Rinehart has also written a series of articles and created some short videos, all of them freely available on his website GospelPatrons.org. Here are two examples that might be of particular interest:

The Gospel Patron behind RC Sproul

WHAT’S INSIDE: Samuel Sey on Critical Race Theory / How the Bible made the world a better place / Is God a hypothesis? / RP's 52 in 22 challenge: a ...

Church history, People we should know

Rahab the whore...mother of Christ

You can download or listen to the podcast version (7 minutes) here. ***** Back when I was studying history as a graduate student, one of my profs pl...