We often find that turning on some music can completely change the mood of our house: kids go from complaining to dancing and singing. So here are three recommendations – oldies but goodies – that have been tested in our household, and recommended by lots of friends and family too. 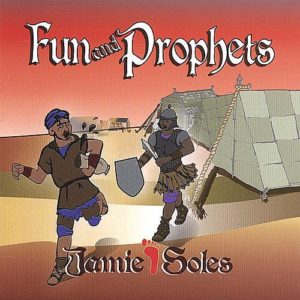 When I asked around for other good children’s CDs, Jamie Soles was a clear favorite with friends and family. While he has adult albums too, Soles is best known for his children’s music, which has a solid Reformed theology behind it.

Some of his songs retell Bible stories, others help children memorize things like the books of the Bible, the order of the Creation days, or the names of the patriarchs.  A lot of it is energetic, with a bit of a beat. The kids enjoy them all, but one of my favorites is “Run,” from the album Fun and Prophets, based on the passage 2 Kings 9:1-13, where a nameless prophet is instructed to anoint Jehu as king of Israel, and then get out of there quickly.

Sometimes a prophet has to stand
Like an iron wall against the land
And standing is fine, when the time is right
But the time is wrong, and it’s fine for flight so….

RUN! Jehu is king, so RUN!
If you want to live you better RUN!

Jamie Soles has more than a half dozen children’s albums (Giants and Wanderers, Wells, Fun and Prophets, Memorials, Up From Here, The Way My Story Goes, Good Advice) all of which can be ordered, and downloaded at SolMusic.ca. He is worth checking out! 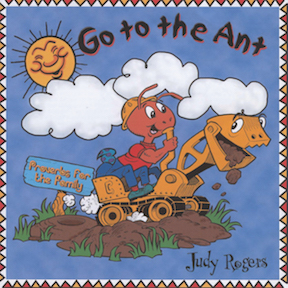 As I was asking around, another name that came up repeatedly was Judy Rogers, the wife of a Reformed Presbyterian pastor, who has been making music for more than 25 years.

In Go to the Ant she bases most of the songs on passages from Proverbs, teaching children about the dangers of “The Tongue,” about what we can learn about hard work when we “Go to the Ant” and about the cost of attending “The School of the Fool.” The lyrics are a solid mix of fun and wisdom. A problem common to children’s Christian music is that it often strays into irreverence but that is certainly not a concern here.

If you are familiar with Jamie Soles, Judy Rogers has an overall quieter sound – quite a bit less beat. Her voice is beautiful, and also contributes to the lighter sound; this is folk music that won’t be confused with pop/rock. My three-year-old daughter is a fan and, incidentally, R.C. Sproul is too. Overall I would say this is an album that kids will like, but it won’t have the same crossover appeal with parents that Jamie Soles seems to have.

To hear song samples and read the lyrics, visit JudyRogers.com. The album can be ordered many places online including Amazon.ca. 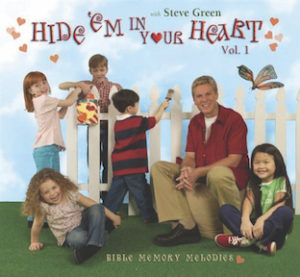 Steve Green’s music is bright and cheerful, and the words are always clear and easy to understand. Each song on this album is a verse, or two, from Scripture (either NIV or NKJV) with Green beginning each track with a short, spoken introduction. The verse is repeated at least a couple of times in each song, but Green finds a nice balance in promoting Scripture memorization and keeping the repetition to a minimum so the songs don’t become wearisome – on average each track is less than 2 minutes long.

The album also features some of the very best children’s singers. The boys and girls still sound like normal children, rather than professionals, while hitting all the right notes.

If I had to pick a nit with this album then I could point to a couple of the spoken introductions, where Green seems to explain the passage in a slightly Arminan-ish way. But this really is a nitpick, because kids won’t notice, and the parts your children will be singing all over your house are the verses taken straight from Scripture. I love this album because I love hearing my daughter sing “And Jesus grew in wisdom, and stature and in favor with God and men” (Luke 2:52 and Track 8). Very fun!

The Master Designer: The Song

Documentary 2014 / 76 minutes RATING: 8/10 What I most appreciated about The Master Designer was this nature documentary's patience, showing us ...

Living clouds (5 min) How do they do it? Thousands of starlings, flying at speeds of 50 miles per hour, moving in such precision together that they l...

Life's Story 2: the reason for the journey