It turns out that Winnie the Pooh, a teddy bear who had fantastic and entirely fanciful adventures, was named after a real bear whose adventures were quite something too, and of the genuine sort.

Just as Winnie the Pooh starts with a father telling his son a story, so too Finding Winnie beings with a parent telling her child a bedtime tale. In this case, the storyteller is the great-granddaughter of the man who gave the first Winnie his name. Harry Colebourn was a vet living in Winnipeg. When the First World War began Harry had to go, so he boarded a train with other soldiers and headed east. At a stop on the way, he met a man with a baby bear, and ended up buying the little beast. To make a long story shorter, this bear – named Winnie after Harry’s hometown – ended up in the London Zoo where a boy named Christopher Robin, and his father A.A Milne came across him and were utterly entranced. 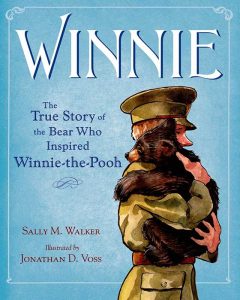 It is a wonderful story, but what makes it remarkable is the charming way it’s told. This is brilliant, and a homage of sort to A.A. Milne’s stories. It’s true, so there is quite a difference between his Winnie tales and this author’s, but the same gentle humor, the same whimsy, that same charm, is there throughout.

This will be a treat for fans of Winnie the Pooh no matter what age. Both my daughters and I were entranced!

The same year a second picture book came out about the bear behind the bear that was also very good, very fun, and different enough that after reading Finding Winnie it is still an enjoyable read as well.

Compared to most any other picture book Winnie is remarkable – really among the best of the best – but it does lack a little of the Milne-like charm of Finding Winnie, and so ranks second among these two books.

by Peter Sís 2021 / 64 pages Nicholas Winston never set out to be a hero but he also knew what needed to be done. When the Germans were taking over Czechoslovakia in chunks, before World War II has officially begun, Jews in the country were trying to get their children out. Winston knew how to get this done, pushing the paperwork, bribing the right people, and arranging for families in England where the children could stay. He ended up saving 669 children, most, or all of whom, were Jewish, and he didn't have to brave bullets to do it. That is the important lesson of this book: that there are quiet ways to do vital work. It was quiet work, but no less life-saving than what Allied soldiers did fighting to end the Nazi reign. And in its quiet manner, Winston's actions were more like the important work we are called to do today – our fights are not in the trenches, but writing our MPs, or making donations to the right organizations. We can, for example, save lives by donating to pregnancy crisis centers, and do so at no risk to ourselves. But we need to be persistent, seizing opportunities when they come, creating them when they don't, and working around obstacles as they appear. Winston was not Christian so far as I can tell (it doesn't come up in the book), but his example is still one we can benefit from. This would be a great picture book for a school library, to be pulled out and showcased around Remembrance Day each year....

What a Savior! Christ on the cross intercedes for his enemies

Can two denominations become one? What are the state of CanRC and URC unity talks?

A Spiritual Roadmap for Modern Pilgrims by Peter Kreeft 1996 / 128 pages This is an allegorical journey, reminiscent of John Bunyan's Pilgrim's P...