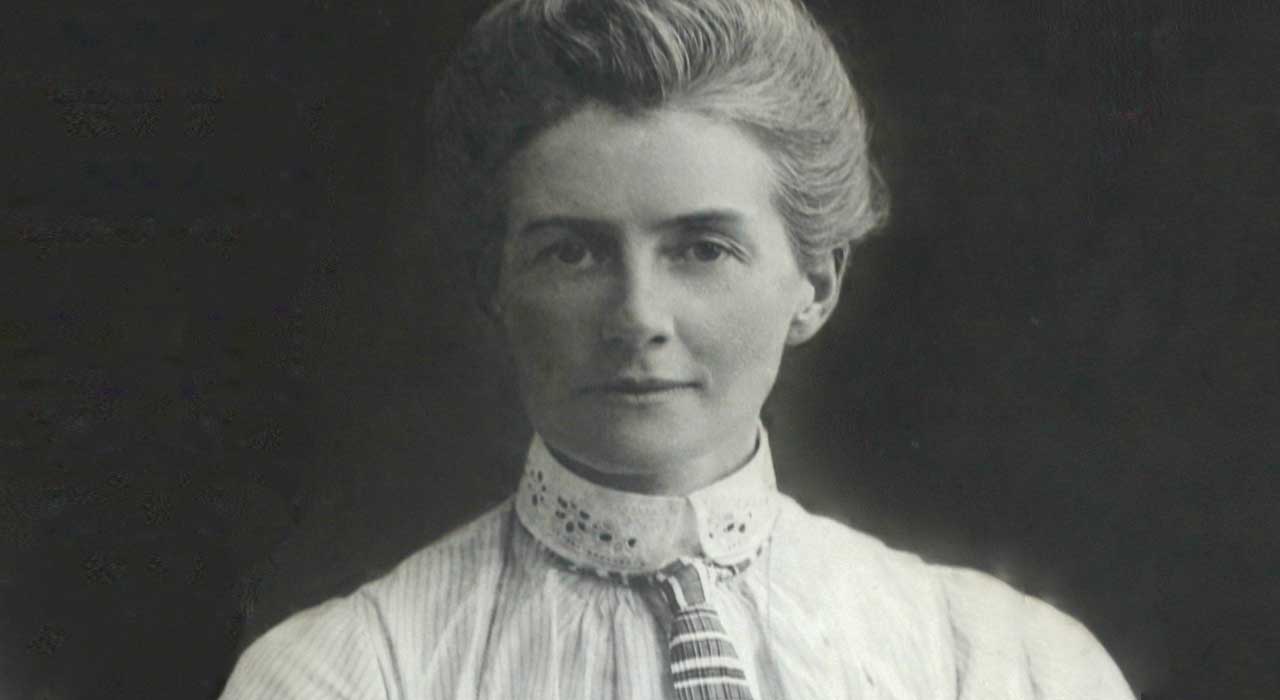 Instilled with a desire to please her Creator God, Edith Cavell became a nurse; she lived what she professed, and died bravely at the hands of German soldiers. Her crime? Assisting Allied soldiers escape from German-occupied Belgium. In a seemingly hopeless situation, she persevered and did not shun the victor’s crown. She was a gift given by God to His Son Jesus Christ and, as such, saved for eternal life.

Throughout the fifty years of Edith Cavell’s life, she was content to work hard and live humbly. She was a godly woman and, therefore, a godly historical example. The Bible instructs us to teach our children about such historical examples. Psalm 78:4 reads: “We will not hide them from their children, but tell to the coming generation the glorious deeds of the Lord and His might, and the wonders that He has done.” At a time in history when examples of godly women are few and far between, much needed strength and encouragement can be drawn from the life of this lady who put all her trust in Jesus Christ, her Savior. 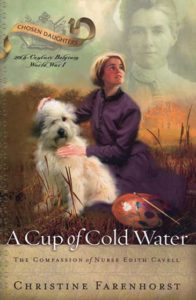 The following is an excerpt from the Christine Farenhorst historical fiction novel of Edith Cavell’s life, called A Cup of Cold Water, (P&R Publishing, 2007). At this point Edith has been helping many Allied soldiers escape out of German territory.

Breakfast was generally served at an early hour in the L’Ecole Belge d’Infirmieres Diplomees, the Belgian School of Lay Nurses. Too early some of the nurses said.

“It is actually 7 o’clock, you know,” José said at 6 o’clock one morning, as he bit into a thin piece of toast. Puzzled, everyone stared at him and he went on. “The Germans changed our time yesterday. We are now on German time and no longer on Belgian time. All the public clocks have been put ahead.”

“Well maybe,” Pauline added hopefully, “we should get up later.” She eyed Edith but Edith was looking at cook in the doorway.

“Excuse me, Madame,” the cook said, “there is someone to see you in the kitchen.”

Edith got up, wiped her mouth on a napkin and left the dining room quietly after glancing at Elisabeth Wilkins. Elisabeth nodded to her, indicating that she would supervise while Edith was gone.

Louise Thuliez, one of the resistance workers Edith had come to know, was waiting in the kitchen. She had come in through the back entrance. Brown hair hidden under a kerchief, the young woman was obviously relieved when Edith walked in. Ushering her through the hall towards her own office, Edith could feel the woman’s tenseness.

As soon as the door closed behind them, Louise spoke. There was urgency in her tone. “I have two men waiting to come to the clinic.”

Edith nodded. “Fine. Direct them here. I’ll see to them.”

Louise nodded, brusquely put out her hand, which Edith shook, and disappeared. Left alone in her small office, Edith passed her right hand over her forehead in a gesture of weariness. Running a hospital in peacetime was not easy, but running it in wartime, with mounting bills for food and medicines which would never be paid by the patients, was next to impossible. She had received some money from Reginald de Cröy and Monsieur Capiau but the men who had been sent to her regularly since Monsieur Capiau’s first appearance all had hearty appetites. Resources were at the breaking point. With a glance at the calendar, she saw it was her birthday and with a pang she realized that it would be the first year she had not received letters from Mother, Flo, Lil, Jack and cousin Eddie. She swallowed. Jack growled softly and she looked out the window. Two men were approaching the walkway. Bracing herself, she smoothed her hair, patted the dog and went out into the hall to await their knock.

Although most of the men sent to the school only stayed one or two nights, some of them stayed a longer. As Edith awaited the arrival of the new refugees, she wondered how long she would need to provide them with shelter. If they were ill, they would be nursed right alongside German patients. Many of the nurses in the school were unaware of what was going on. All they saw were extra patients — bandaged, limping and joking patients.

The Café Chez Jules was situated right next to the school. To recuperating soldiers, as well as to idle men with nothing to do for a few days, it became a favorite gathering place. The Café served watered-down wine and at its tables the men played cards, chatted and lounged about. But even if the Germans were not yet suspicious, word quickly spread around the Belgian neighborhood that Allied soldiers were hiding in the nursing school.

Once again, as she had done so often, Edith opened the door. A short, thickset man looked Edith full in the face.

“My name is Captain Tunmore, sole survivor of the First Battalion of the Norfolk Regiment.” He spoke with a heavy English accent. “And this,” Captain Tunmore went on, indicating the man at his side, “is Private Lewis of the Cheshire Regiment. Password is yorc. We’re both looking to get across to border.”

Edith shook their hands. They were a little nonplused that this small, frail-looking lady whose hand totally disappeared in their grasp, was rumored to be so tough.

“Do you know Norwich?” Edith asked.

“It’s my home. I was born on its outskirts.”

Edith took another look at the man. The fact that he said that he was Norfolk born, gave her, for just a small moment, the feeling that she was home, that she was looking into her mother’s face.

“Well, gentlemen,” she smiled, “I’m afraid you’ll have to spend Christmas here with us as there is no guide to take you until after the twenty-fifth.”

Captain Tunmore and Private Lewis had come without identity cards. Edith, consequently, took photographs of the men herself and had contacts make identity cards for them. After Christmas, she arranged to have them travel towards Antwerp in a wagon but they were discovered and barely made it back safely to the clinic a few days later. Edith, therefore, prepared to guide them out of Brussels herself.

“Gentlemen, be ready at dawn tomorrow. I’ll take you to the Louvain road. From there you’re on your own.”

At daybreak, Edith taking the lead and the men following her at a discreet distance, the trio made their way to a road outside of Brussels. Once there, Edith passed the soldiers a packet of food as well as an envelope of money. “In case you need to bribe someone – or in case you get a chance to use the railway,” she said. Shaking their hands once again, she turned and disappeared into the mist.

On the walk back, Edith reminisced about how she had walked these very paths as a young governess with her young charges. It now seemed ages ago that they had frolicked about her, collecting insects, drawing, running and pulling at her arm to come and see some plant which they had found. Now she understood that God, in His infinite wisdom, had used that time to intimately acquaint her with this area. How very strange providence was! At the time she had sometimes felt, although she loved the children dearly, that her task as a governess was unimportant – trivial perhaps. Yet it had equipped her for the role she now played. Smiling to herself she thought, “Why am I surprised? After all, does not the Bible say that it is important to be faithful over a few things.

A noise to her left interrupted her reverie and she slowed down. A German guard suddenly loomed next to her. “Halt! Papieren, bitte — Stop! Papers, please.”

Silently she took them out and waited. He waved her on after a moment and she resumed her way. What would her father have thought about these activities, she wondered?

“Out so early, my Edith?” she imagined him asking.

“Yes, father. Just a little matter of helping some soldiers escape to the front lines. If they are found, you see, they’ll be sent to an internment camp somewhere, or they might be shot.”

“What about you, my Edith?”

“Oh, don’t worry about me, I’ll be fine. And besides, what else can I do? These men, these refugee soldiers, father, they just come to me. They arrive on my doorstep and look so helpless, so afraid that I will turn them away.”

“Well, my Edith, you are doing right. Remember the words of the Lord Jesus, child: “I was thirsty and ye gave me drink: I was a stranger, and ye took Me in.”

“I remember, father. I remember.”

“And in the end … in the end, Edith, He will say ‘Come, ye blessed of my Father, inherit the kingdom prepared for you from the foundation of the world.’”

No time for childhood

Throughout the spring of that new year, 1915, Edith continued to rise early on the mornings that soldiers were to leave for the frontier. English, French, and Belgians – they were all men eager to leave so that they could help the Allies. Between five and seven in the morning, she would accompany the men to the planned rendezvous point with the next guide, generally a tramway terminus or a point in some street.

Arriving back after one such venture, in the early days of March, she found Elisabeth waiting for her in her office with a very guilty-looking Pauline and José at her side.

“What is the trouble?” Edith asked as she took off her coat.

“Would you like me to tell her, or shall I?” Elisabeth’s voice was angry.

José shuffled his feet but he met Edith’s gaze head-on. Then he spoke. “I encouraged all the families on Rue Darwin to set their alarm clocks at the same time. I told them to set it for six o’clock in the morning, the time I knew a single patrol would be passing.”

“And,” she encouraged, “what happened?”

“Well, when all the alarms went off at the same time, the soldier jumped a mile into the air. You should have seen– ”

“Was anyone hurt?” Edith interrupted him.

“No, no one,” Pauline took over, “everyone only let their alarms ring for five seconds exactly. After that they shut them off at the same time. It was deathly quiet in the streets and all the people watched the silly soldier through their curtains as he looked behind him and around corners and pointed his silly rifle at nothing. We laughed so hard.”

Edith sat down. “Do you have any idea what could have happened if that soldier had shot up at a window? Or if he had kicked open a door and …” She paused. They really had no idea about the seriousness of the times in which they were living. She sighed again and went on. Pauline looked down at the floor and José appeared fascinated with the wall.

“You ought to know better than anyone, José, how dangerous it was what you did. After all, you have come with me many times to help soldiers find their way through and out of Brussels so that they can escape to safety. War is not a game.”

After they left her office, thoroughly chastened, Edith sat down at her desk, put her head into her hands and wept. Childhood seemed such a long way off and the Germans were stealing much more than blackberry pie. 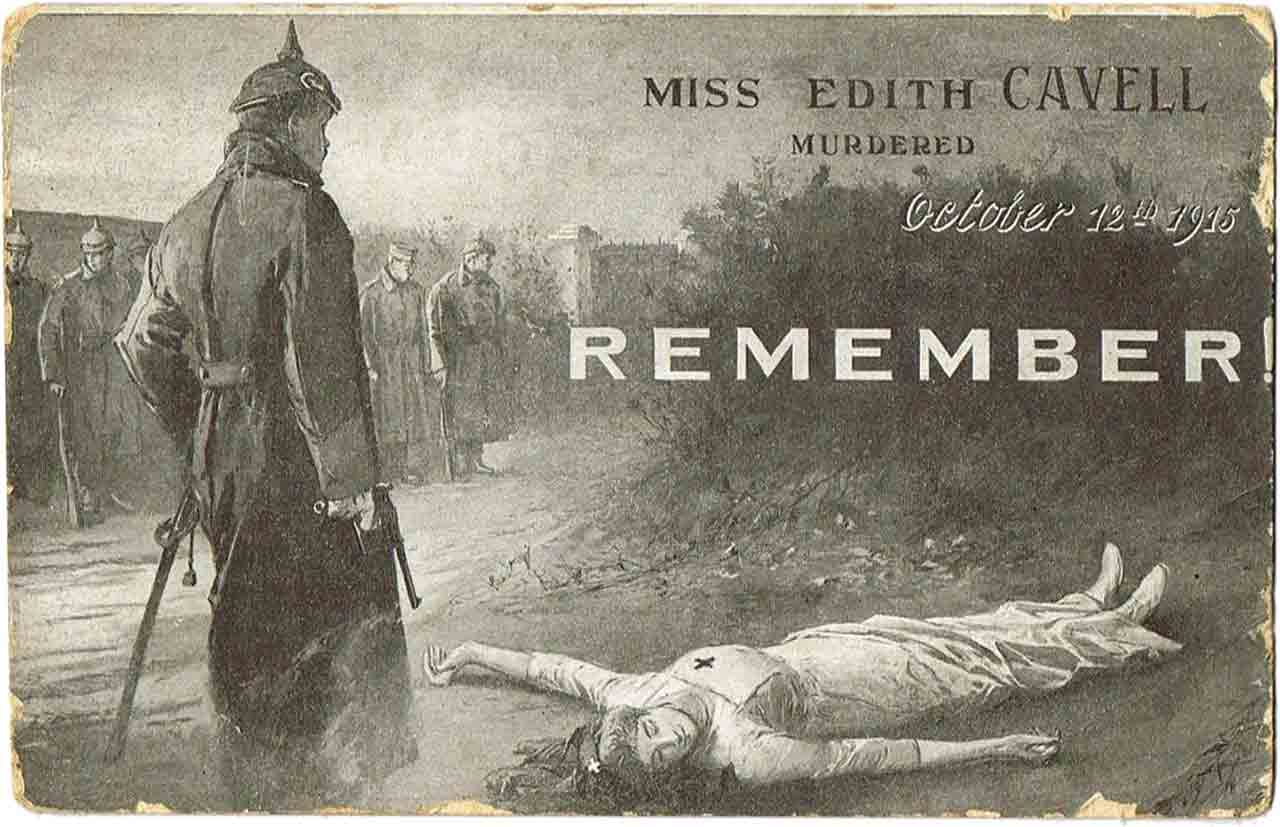 Edith Cavell’s death was memorialized on propaganda posters like this one.