The Defenestration of Prague

You can download or listen to the podcast version (5 minutes) here.

Today we’re going to look at a small event that had big consequences. This was the Defenestration of Prague.

It was May 23, 1618, and Catholic representatives of the Holy Roman Emperor Ferdinand II arrived at the Bohemian Chancellery in Prague bright and early at 8:30 am. To understand why this visit mattered, you have to know a little bit of the background.

In 1555, the Peace of Augsburg had settled religious tensions in the Holy Roman Empire by allowing the local ruler to determine the state religion of the region rather than the Emperor himself. Back in that time, if you were Catholic and the ruler was Protestant, or you were Protestant and the ruler was Catholic, you had to put up with discrimination, or else you had to move to a different principality.

By our 21st century standards, that sounds awful, but it was quite a change and a change for the better.  Before the Peace of Augsburg, the official faith of the entire empire had been decided by the emperor who was generally Catholic. That meant that Protestants either had to accept persecution and discrimination or leave the empire, an area bigger than modern Germany. Compared to that, moving to a nearby town was a breeze.

With a new ruler, a Catholic, being appointed over Bohemia, the Protestants were nervous. They thought their religious freedom was being threatened, And just in case they thought they were being paranoid about that, the Roman Catholic Church started to demand that no further Protestant churches be built in Bohemia. The church said the land was Catholic, but the Protestants said the decision about religion belonged to the local ruler. 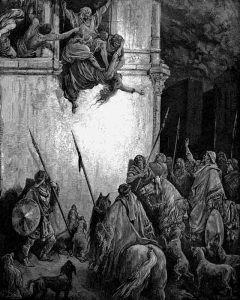 While the word “defenestration” is a recent one, the act itself has been going on for a lot longer. As the “Death of Jezebel,” by Gustave Dore, depicts, this monarch’s end came when her eunuch attendants threw her out an upper story window (2 Kings 9:30-37).

So, back to that meeting on May 23, 1618. Things seem to have gotten out of hand very quickly, and the representatives of the emperor were put on trial for trying to restrict freedom of religion in Bohemia. The verdict was probably a foregone conclusion, and apparently the sentence was death because it wasn’t long before the Protestants were attempting to defenestrate the Catholics, which is to say throw them out the window.

Those Catholic nobles took a tumble, falling 16 meters to the ground, yet were physically unharmed… though their pride had certainly taken a beating. The Catholics said the men had landed without incident because they were carried down on the wings of angels. The Protestants were quick to counter that the men had actually had their fall cushioned by a giant dung heap.

And while you might say the whole event stinks, the consequences of this single, ridiculous event were tragic. This defenstration – throwing people out the windows – acted as the trigger event to the Thirty Years War. France, Sweden, Denmark, Spain, and a whole lot of the German states were eventually pulled into this war, with estimates ranging from 5 to 11 million killed. It ultimately ended in 1648 in the Peace of Westphalia, which, ironically, re-established the right of the local ruler to determine the official religion of his region.

Perhaps the one truly odd thing about the Defenestration of Prague is that this was actually the second Defenestration of Prague. The first occurred 199 years earlier, in 1419, when a protest by Hussites, an early group of Protestant Reformers, was hit by a rock thrown from a window in the town hall. The enraged Hussites ran into the town hall and threw several town councilors out the window.

As well, in 1948 Soviet government agents were in Prague with the mission of intimidating local officials. Jan Masaryk, the Czech foreign minister, was found dead in the courtyard of the Foreign Ministry, just below the bathroom of the suite he occupied. The official explanation was that he had jumped to his death. Foul play by Soviet agents with a remarkable sense of history was widely suspected by those who knew Masaryk.

Unfortunately for those in the last two examples, this time there were no dung heaps close by.

This article is taken from an episode of James Dykstra’s History.icu podcast, “where history is never boring.” You can check out other episodes at History.icu or on Spotify, Google podcasts, or wherever you find your podcasts. The cover picture is “The Defenestration, 1618” by Václav Brožík (c. 1890).

To dig a little deeper see:

A Christian perspective on freedom of speech

This was first published in the June 2010 issue To say American author and columnist Ann Coulter is “outspoken” is rather like saying Solomon was...

by Lindsay Mattick 56 pages / 2015 It turns out that Winnie the Pooh, a teddy bear who had fantastic and entirely fanciful adventures, was named a...