C.S. Lewis on the Pope: infallible, fool, or fraud

According to a 2009 Pew Research poll, more than 1 in 5 mainline American Protestants believes in reincarnation. Central to being Christian is relying on Christ to pay for our sins, and knowing that, because we have been made righteous in Him, after death we will go to Heaven. But those who believe in reincarnation think that after death we return to Earth, again and again. The two understandings stand in stark contrast to one another. And yet twenty-four percent of mainline American Protestants hold to both.

And they’re not the only confused ones. On the topic of infant vs. adult baptism, I’ve been confronted by Christians who figure there is some sort of middle ground. They argue that a Baptist who thinks that infant baptism is wrong, and a Presbyterian who thinks it is proper, can both be right.

This modern ability – to sincerely hold to two contradictory beliefs – makes it difficult to discuss anything. Before we can argue which belief is better than the other, it’s necessary to explain that a choice has to be made, that the two ideas we are contrasting can’t both be right.

We work closely with Roman Catholics in the pro-life movement. We all want the very best for the unborn, so there is an ever-present temptation to minimize our differences. We’re sincere, they’re sincere, so isn’t that enough?

While we can and should certainly work with Roman Catholics to save the unborn, we must be clear, for their sakes, about the gulf that divides us. We do our Catholic friends no favors in minimizing our differences. So how can we best show them how significant those differences are?

C.S. Lewis has the answer.

In Lewis’s time, and today as well, there are many who will accept Jesus as a great moral teacher, but who at the same time insist he was only a man. In Mere Christianity Lewis quite rightly points out that these are two contradictory thoughts:

A man who was merely a man and said the sort of things Jesus said would not be a great moral teacher. He would either be a lunatic – on the level with a man who says he is a poached egg – or he would be the devil of hell. You must take your choice. Either this was, and is, the Son of God, or else a madman or something worse. You can shut him up for a fool or you can fall at his feet and call him Lord and God. But let us not come with any patronizing nonsense about his being a great human teacher. He has not left that open to us. He did not intend to.

Infallible or a stumbling block

Many Catholics take a “cafeteria approach” to what the Pope says, picking out the pieces they agree with and passing by the parts they don’t like. For example, prominent pro-abortion politicians such as the former American Secretary of State John Kerry, and current Canadian Prime Minister Justin Trudeau, think they can be both Catholic and pro-abortion. In 2003 another Roman Catholic Prime Minister, Jean Chretien, responded to a papal plea against gay marriage, by declaring he would ignore it. Chrétien’s spokeswoman went so far as to say: “As prime minister of Canada, he has the moral responsibility to protect the equality of Canadians.” 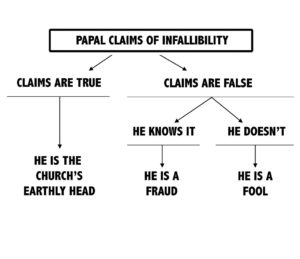 Many Protestants too, feel they can take a middle-of-the-road approach in regards to the Pope. While they deny that his official teachings are infallible, and ignore papal directives to pray to Mary and the saints, and don’t believe in the Purgatory he preaches, they still revere him as a great Christian leader.

But if we take our lead from Lewis we see that the Pope doesn’t leave us with that option. He is either what he claims to be – the Church’s infallible guide – or he is a fool or, something worse. There isn’t any room for a middle ground.

If he is Christ’s representative here on earth and his official teachings on moral issues are infallible, then a statement such as Prime Minister Chrétien’s spokeswoman made, that it was his “moral responsibility” to ignore the Pope’s directive, doesn’t make any sense. If the Pope is what he claims, then God appointed him to explain to everyone else just what morality is – papal proclamations would define morality. And if the Pope is what he claims all Christians must follow all of his official teachings.

Alternately if the Pope’s claims are false, then he has misled hundreds of millions. His followers flock to shrines and bow to images not because the Bible tells them to do it but because he tells them to. They ask dead saints for their help because he has taught them to do so. They reverence Mary because he has elevated her. If the Pope is not infallible, then he is a fool or a fraud. If the Pope is not what he claims to be, then Christians within the Roman Catholic Church are believers despite following the Pope, not because they followed him.

This is the only option the Pope has left open to us – to either accept him completely or reject him utterly as a fool or something worse. Anything else is “patronizing nonsense.”

by Donald J. Sobol 1963 / 88 pages Idaville is a small town with an impressive record - no one, absolutely no one, gets away with breaking the law. ...

by Sigmund Brouwer and Hank Hanegraaff 2004 / 428 pages It’s the year 65 AD, and Gallus Sergius Vitas is one of the last principled men in Rome....