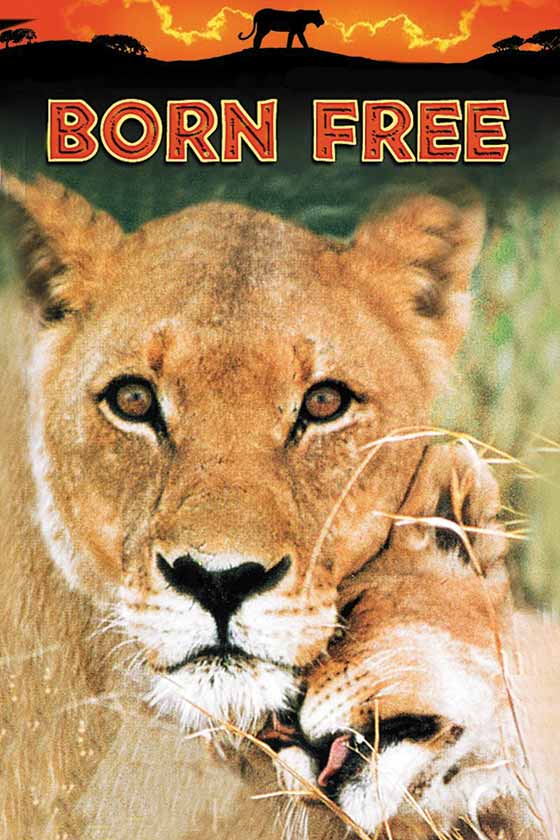 When a man-eating lion has to be shot, and his mate too, three little cubs are left as orphans. Game warden George Adamson takes them back to his wife Joy, and their home.

As you might expect, three wild lion cubs can get into all sorts of hijinks when they’re kept inside. Seeing Elsa, Lustica, and Big One bound on the furniture, and on the Adamsons will be a favorite part for many younger viewers.

The Adamsons raise the triplets until they are too big to manage, and then send two to the Netherlands Rotterdam Zoo. But Elsa, the runt of the litter, ends up staying with them….until it become impossible to keep her too. But how can they send Elsa off to a zoo when all she’s known was the wide spaces of the game reserve? The couple hatches a plan to teach their Elsa how to hunt and survive in the wild.

The story begins with a woman, busy washing her clothes in the river, getting attacked by a lion. We see only the lion charging, the woman shriek and put up her hands, but not the attack itself. Afterwards a shot of the river shows blood flowing by. While this opening scene is too scary for young children, if parents fast-forwarded that bit (explaining, rather than showing, what happens) the rest of the film could probably be viewed by most children 8 or 9 and up.

A 1-minute scene (in the last 10 minutes of the film) of one lion fighting another might also be too intense for young viewers.

Language concerns include one instance of “damn it” but nothing else.

In children’s entertainment, whenever Nature or the environmentalism is addressed, Man is most often portrayed as a curse on creation rather than as a caretaker of it (think Bambi, Ferngully, The Lorax, etc.). But in Born free the Adamsons are games wardens, responsible for the care and management of creatures. We might question some of their priorities (when the Elsa stampedes an elephant troop into a village that should have been reason enough to send her away to a zoo). But overall, in Born Free Man’s management role is assumed – the Adamsons are exercising dominion (Genesis 1:28). That makes this film a counter to some of the unbiblical environmental propaganda children will encounter, particularly if mom or dad use it as a conversation starter.

Based on a true story, Born Free is simply enchanting. Some of that is due to the on location shooting in Africa, as well as the Oscar-winning score. But the scene-stealers are the lions, especially when the three sisters are all cubs getting into laugh-out loud mischief. Whether you are a cat person or not, watching these beautiful creatures jump and play and hunt will have you in awe of the Creator who crafted them.

Born Free is a film that all ages will enjoy…so long as parents note the warnings above.

by Lindsay Mattick 56 pages / 2015 It turns out that Winnie the Pooh, a teddy bear who had fantastic and entirely fanciful adventures, was named a...