The Genesis Account: A theological, historical, and scientific commentary on Genesis 1-11 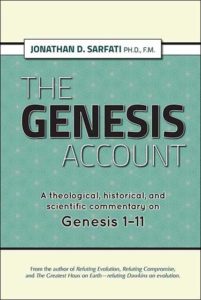 Outside of sermon preparation, it is not often that I read a commentary from front to back. If my reckoning is correct, this is only the third time and certainly the longest of the three – but it was well worth it! Dr. Jonathan Sarfati of Creation Ministries International has provided the Church a monumental resource on issues relating to the first 11 chapters of Holy Scripture.

Sarfati has produced a thorough commentary on Genesis 1-11 which takes Scripture seriously as the inerrant Word of God. The greatest strength of this volume is its commitment to the inspiration of the entire Bible and everything that necessarily must follow from that.

For example, one of the foundational issues that confronts Genesis commentators immediately is authorship. Commendably, Sarfati appeals to all of Scripture to prove the traditional view that Moses wrote Genesis, though quite possibly collating materials from earlier. Throughout the commentary, he also refutes the arguments of the “documentary hypothesis” – the old liberal idea that several authors were responsible for the Pentateuch, authors who lived much later than Moses.

Generally, Sarfati lands on the right side of the issues in the interpretation of these chapters. He defends creation in six ordinary days – a creation which happened thousands of years ago, not millions. He maintains that Adam was created on the sixth day out of literal dust from the ground, while Eve was created from Adam’s rib. There was a literal snake which led to a historical fall of the first man and first woman. Later, Sarfati makes the case for a global flood in the days of Noah. He gets full marks on the big-ticket items.

When we get down to some of the interpretive details, I disagree with Sarfati on some points.

For example in Genesis 6:2, we read that “the sons of God saw that the daughters of man were attractive. And they took as their wives any they chose.” Sarfati vigorously argues the old view that “the sons of God” were angels. In other words, angels were married to human beings and had sexual relations with them. He argues that Jude 6-7 proves that angels engaged in sexual immorality. He argues that since angels can eat, surely they could also reproduce.

I am not convinced. In their essence, angels are spiritual beings, not physical beings and therefore cannot engage in sexual relations, much less reproduce by inter-breeding with humans. I find the “Sethite interpretation” to be correct – people descended from Seth (the line of the Messiah) married rebellious unbelievers. However, I would also grant that Sarfati’s view falls under the umbrella of what we call “the freedom of exegesis.”

As a Reformed reader, regrettably, there are other areas where I cannot be as forgiving. While I have a lot of appreciation for the work Sarfati has done here, I would be remiss if I did not highlight several serious theological issues.

One issue that arises here and there is Sarfati’s dispensationalism. He often quotes from (and refers to) fellow Messianic Jew Arnold Fruchtenbaum, another dispensationalist and figure on the “biblical prophecy” scene. This view emerges when, for example, Sarfati argues that Genesis does not speak directly about the church. For a Reformed believer, Genesis is all about the church! Sarfati makes a distinction between the Old Testament people of God (Israel) and the church, but the Belgic Confession says in article 27, “This [catholic] church has existed from the beginning of the world and will be to the end, for Christ is an eternal King who cannot be without subjects.” Not unrelated to this is the muted development of covenant theology in this commentary. For example, there is hardly a word about God’s covenant with Adam and Eve either before or after the fall into sin.

Another issue which caught my attention was Sarfati’s occasional references to followers of philosopher Gordon Clark, particularly Gary Crampton and John Robbins. Clark was part of the Orthodox Presbyterian Church when it first began in 1936. However, theological complaints lodged against him eventually led to his departure in the late 1940s. In Clark’s thinking, logic and God are to be identified with one another. God is pure logic, according to Clark and his followers. Clark famously translated John 1:1, “In the beginning was Logic, and Logic was with God, and Logic was God…” Critics of Clark (like John Murray and Cornelius VanTil) argued that Clark had confused creation with the Creator. God stands sovereign over logic; he is not subject to it nor equal to it. Unfortunately, Sarfati seems to follow Clark’s reasoning in several places. It leads him to assert that maintaining the presence of any paradoxes, antinomies or tensions in Scripture (even apparent contradictions or humanly irreconcilable statements) is very dangerous. However, I would argue that this makes God, the author of Scripture, subject to our notions of what must be logical – far more dangerous! There are things taught in Scripture that are simply not capable of rational explanation – for example, the one God eternally existing in three persons. This is why the Belgic Confession says in article 9 that “this doctrine far surpasses all human understanding.”

Enough about the theological and interpretive issues – this commentary also promises to shed scientific light about the first chapters of Genesis. This is where this commentary is most helpful. A few examples will illustrate.

Genesis 2:21 says that God created Eve from Adam’s rib. Sarfati notes the fact that human ribs can actually regenerate. Hence, Adam would eventually have had a complete set of ribs again.

When discussing the Flood, the commentary point outs that catastrophic plate tectonics can explain the mechanism of this deluge.

How do we explain the formation of canyons that appear to be millions of years old? Sarfati describes how canyons have rapidly formed following catastrophic events like the eruption of Mt. St. Helens in 1980.

Off the coast of Iceland, an island (Surtsey) appeared due to volcanic activity in 1963. Scientists have since been dumbfounded at how quickly Surtsey developed a “mature landscape,” including cliffs that would otherwise have been dated as far older.

In many instances, I was skeptical of Sarfati’s claims. However, I did my own research on many of them and in every instance, so far as I could tell, his claims proved accurate.

This commentary aims to be scholarly in many respects. The author has used the original biblical languages – Greek and Hebrew are found throughout, but always transcribed. A lot of research is in the background, both biblical and scientific. However, an incongruent feature is the informal style of writing often used – this can be distracting in a commentary that strives to have an academic calibre.

The Genesis Account would especially serve well in the context of Christian education. Christian science and Bible teachers should have this volume on hand and refer to it often – they will find that their teaching on creation-related issues will be greatly enhanced!

Preachers would also appreciate it, especially when confronted with questions from parishioners. I regularly give my catechism students the opportunity to ask me questions. I am always surprised how many of the questions have to do with either the beginning (protology) or the end (eschatology). This book has already helped me to be better prepared to deal with the former.

Last of all, all Christian households could benefit from having a book of this nature on hand as a reference tool. When you hear or read the claims of the world, Sarfati will typically lead you back to the solid ground of biblical teaching on origins. Yes, as noted above, there are some caveats, but overall this commentary can be recommended.

Dr. Bredenhof blogs on books and many other things at Yinkahdinay.Wordpress.com

How should Christians celebrate the good Donald Trump has done?

A controversial bill to redefine triangles was presented in the British Parliament this past month. Debate was opened by the Culture Secretary, Valeri...

“Hey, here’s your sandwich,” I called across the lunchroom to Caldwall, the kid we picked on. He was fat and unathletic, and we kept him in h...

WHAT’S INSIDE: Family films, old and new / Evolution as a gravedigger / What must Ben Shapiro do to be saved? / Jenny Geddes: the Reformer who let f...