BOOK REVIEW: Ed Welch’s “Blame it on the Brain?” 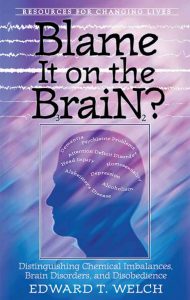 Blame it on the Brain?: Distinguishing chemical imbalances, brain disorders, and disobedience
by Edward T. Welch

A boy won’t sit still so the doctor wants to put him on Ritalin. An aging grandfather, suffering from Alzheimer’s Disease, is starting to make inappropriate comments to his grandchildren. A mother is depressed and asks her minister what he thinks about anti-depressants. These days we’re regular confronted with “brain issues” but few of us feel equipped as to what God thinks on these matters.

Author Ed Welch notes that while going to the Bible would be the natural thing for us to do with most other matters, it might strike Christians as an odd approach in this case. After all, what does the Bible have to say about our brains? Welch answers that question by noting that God made us, so He knows what we are really like. And what God reveals about us – about how our body and spirit are both distinct and yet impact each other – is foundational to a good understanding of our brain.

Blame it on the Brain is divided in two parts.

In Part One Welch offers up the theological resources Christians will need to be able to “dialogue with the brain sciences.” These are the biblically-derived principles by which we can interpret and understand the (mostly secular) brain research being done. Once we are outfitted with the proper theology and taught how to apply it, Part Two then explores some “modern diagnoses and experiences, all attributed to the brain, and considers them from a biblical perspective.

Where Welch places different conditions will strike some readers as controversial. Doesn’t the world say all of these conditions should fall under the “The Brain Did It” umbrella? It does indeed, because the world think if the brain did it, then our sinful hearts can be excused. “Born this way” is supposed to clear us from any responsibility for our conduct.

But Welch’s three-fold division is less controversial when we understand that even conditions with clear physical causes, like dementia, will have a spiritual dimension as well – responsibility persists, even if it is to a far different degree.

For example, if a dementia patient’s confusion leads him to believe he has been waiting for his daughter all day long (even though she arrived right on time) she should try not to be bothered if he expresses some frustration. However, if the same patient starts making crude comments to the nurses, then that should not be dismissed as simply the disease talking. As Welch writes,

Does the disease create the sinful behavior? Definitely not…. Sexual thoughts, jealousy, private profanity, and anger can be neatly covered when our minds are intact. But when we are intellectually less competent, some of the private events begin to slip out.

Dementia isn’t the cause of this sin; it simply reveals what was always in the heart. In a situation such as this repentance should still be be sought. Even when our brain is damaged, we remain both physical and spiritual beings, and as in need of accountability, correction, and forgiveness as the rest of humanity.

The only caution I have is not with what Ed Welch wrote, but with how a couple of passages might be misunderstood.

A second matter that might be misunderstood is how Welch designates homosexuality as something “the brain didn’t do.” If he denies the brain dictates someone’s sexual preferences, is Welch saying everyone chooses to be homosexual? No. Welch is only arguing that while the brain may have an influence it cannot be credited as the sole determiner of their sexual orientation – other factors have to be involved.

This isn’t a large book, but there sure is a lot to love! I must have highlighted half of the pages and I really can’t say enough good things about. Educational, thoroughly biblical, helpful, applicable, and it still manages to be enjoyably readable. This would be a valuable resource for minsters and elders, and a highly recommended read for everyone. We all need to learn how to think biblically about mental illness and matters of the brain and I can’t imagine a better introductory book for this topic.

Jon Dykstra and his siblings blog on books at ReallyGoodReads.com, where this first appeared.

F.R.E.E.D. – an acronym to help us defend and use our religious freedom