Undeniable: why doubting Darwin is a matter of common sense

There’s no shortage of books poking holes in evolution, but Douglas Axe’s Undeniable is something special – he explains why evolution isn’t merely wrong, but is so completely inadequate an explanation for life’s origins that even children can see through it.

In Romans 1:20 God tells that through His creation He has made His presence known to all – none have an excuse. So it shouldn’t surprise us that from the earliest age children intuitively disbelieve Darwin’s theory. Axe quotes Berkley professor Alison Gopnik speaking on the challenge for teachers of evolution:

By elementary-school age children start to invoke an ultimate God-like designer to explain the complexity of the world around them – even children brought up as atheists.

And it isn’t only children who see God behind creation. Trained, and evolution-professing, scientists also have problems denying what they intuitively know to be so. Deborah Kelemen, a psychology professor is quoted explaining:

Even though advanced scientific training can reduce acceptance of scientifically inaccurate teleological explanations, it cannot erase a tenacious early-emerging human tendency to find purpose in nature.

Or, in other words, even those who claim that everything came about without purpose or design have a hard time talking that way. They keep speaking about evolution as if it had intent.

It’s because it’s hard not to see how well crafted creation is. We’re confronted with the undeniable reality that the marvelous animals we see – from the salmon to the spider to the orca – are so amazing and polished and complete.  When an evolutionist looks at an orca whale breaking out of the ocean surface – “five tons of slick black and white launching out of the water with implausible ease” – he has to profess that this wonder is merely the current manifestation of a creature that was radically different in the past, and will be radically changed in the future. They have to insist there is nothing especially whole, or finished, about how it is now. But we all know better. As Axe puts it, “some things are so good that they cannot be other than what they are.” An orca is not incomplete – it is a finished work of art.

This intuition is available to all. As he’s says elsewhere even a child can spots holes like this. For example, they know:

The same instantaneous reasoning that tells us origami cranes can’t happen by accident tells us real cranes can’t either — not even in billions of years.

ON WHY EVOLUTION IS A NON-STARTER

There has always been a gaping hole in evolutionary theory. Back in 1904, in his book Species and Varieties: Their Origin by Mutation, a Dutchman, botanist Hugo De Vries, pointed out:

[Evolutionist Dan Tawfik’s] own diagnosis…is admirably frank: “Evolution has this catch-22: Nothing evolves unless it already exists.”

As Axe puts it,

What’s left of a theory of origins once it has been conceded that it doesn’t explain how things originate?

Axe is a microbiologist, and as such has done research on the limits of what natural selection can do with enzymes. Try as they might, biologists can’t get innovation even on this tiny scale – enzymes will not, via random processes, come up with new abilities. And if evolution fails on this microscopic scale why would we think it can do bigger things?

The claim that evolution did invent proteins, cell types, organs, and life forms is scientifically legitimate only if we know evolution can invent these things. Consequently our demonstration of evolutionary incompetence for an example of the least of these inventions – a new function for an existing enzyme – undercuts the whole project of inferring evolutionary histories. If nothing can evolve its way into existence, then nothing did.

Evolution isn’t living up to its big claims.  Axe gives an apt analogy:

Imagine a group of people insisting that a certain man can jump to the moon. We, being skeptical, challenge this man to dunk a basketball, and we find that he comes well short of reaching the rim. When we publish our findings, we get lots of complaints, all of the kind “We never said he could dunk a basketball…or at least not that kind of basketball, on that rim.”

Yes, we can see finches get big beaks, and then return to having small ones. We can see dogs diverge into any number of different sizes and types. Natural selection can improve an enzyme’s efficiency. But it can’t make anything new. As Axe puts it, “As a finder of inventions, Darwin’s evolutionary mechanism is a complete bust, but…it sometimes come in handy as a fiddler.”

So how did we get the amazing abilities we have? While evolution claims we came about by a unintelligent, purposeless process we all know that:

Invention can’t happen by accident. Invention requires know-how, and there is no substitute for know-how…. What the inventor can do – seeing possibilities that are otherwise not there and seizing opportunities that only exist because they are imagined – cannot be done by accident.

THERE IS NO REASON TO THINK EVOLUTION CAN DO WONDERS 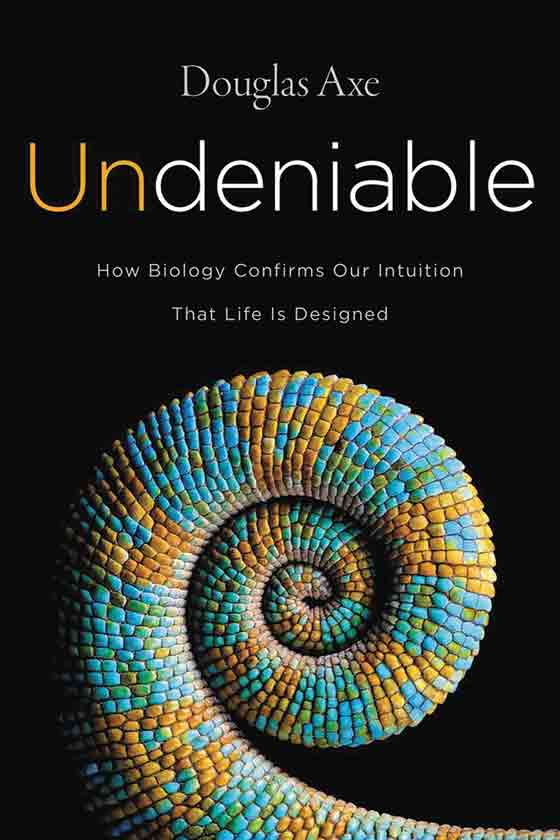 Perhaps the most remarkable claim the Theory of Evolution makes is that this unguided, unintelligent, uninspired process managed to do what even our most brilliant engineers, scientists and designers can’t begin to do. At one point Axe compares one of the “more advanced products of human technology” with one of Creation’s simplest creatures.

Tavros 2 was designed to conduct month-long missions in the Gulf of Mexico, measuring and reporting water depth and temperature. What makes this vehicle particularly sophisticated is that it operates autonomously, under the complete control of its onboard computer. Tavros 2 is programmed to rise to the surface when it needs a solar recharge, after which it dives to its previous location and resumes data collection.

This is a remarkable machine, designed and created by some of the world’s most intelligent and clever people. But it pales in comparison to the common, tiny, cyanobacteria. Both are solar powered, but while the Tavros 2 “needs a solar collector the size of a coffee table,” its living rival “does very well with a collector roughly one-trillionth that size.”

The contrast becomes even more extreme when we consider the manufacturing capabilities. Tavros 2 has none, whereas every cyanobacterium houses an entire manufacturing plant within its microscopic walls.

Axe goes on for 9 pages giving an overview (only an overview) of how much more complex and incredible the lowly cyanobacteria is than the Tavros 2, one of man’s more impressive accomplishments.

So our best work, by our most brilliant designers, doesn’t compare to the simple cyanobacteria that evolutionists say came about through mindless, purposeless, mutation and selection.

Evolutionists point to time as their theory’s savior – inventiveness on the scale of the cyanobacteria may seem impossible in the short term, but what if we add in countless trials and experiments conducted over millions of years?

What’s behind this objection is only another example of why even a child can know better than to believe in evolution. After all, from the earliest age we all know that, “Tasks that we would need knowledge to accomplish can be accomplished only by someone who has that knowledge.” Even if we grant time and countless trials we still know ingenuity – especially on the scale of living things! – can’t manifest itself. Creativity needs a creator. Inventions aren’t created by accident.

The action of bulldozers moving junk heaps at the dump…may well cause a ball bearing to find a makeshift socket or a lever to find a crude fulcrum or a cable to wrap around a cylinder, but none of these simple arrangements do anything significant enough to rise above the junk. Not even on a trillion, trillion planets covered with junk would an accidental robot ever rise up and flee from the bulldozers, much less scurry around looking for parts to build a copy of itself.

Axe set out to show that doubting Darwin is a matter of simple common sense, and he’s done a good job of it. This is going to be a pivotal book – the sort to get people riled up and talking for years to come.

Axe is an Intelligent Design proponent, not a creationist, but this is a book that creationist can embrace. His argument is that biology blows up evolution – to that we can all agree. Unlike most in the ID community, he isn’t hesitant about naming God as the Intelligent Designer – that comes out clearly in the last quarter of the book.

This is an accessible book for anyone who has any appreciation for biology. He’s written this for the non-scientist, and yes, there were a few spots where I found it tough slogging, but once I got through them the rest of the book was a breeze. I’d recommend this for anyone with an interest in biology and the evolution/creation debate – this is an exciting, and more than anything else, encouraging book. God has created all of life as a wonder beyond explanation! Axe wants us all to be confident that, no matter how much and how often mainstream science ridicules those who don’t believe in evolution, it is the Darwin’s doubters who are on solid scientific ground.