The first thing a student of nature learns, is that it is fatal to generalize – an exception can be found to almost any general rule. Most of us, for example, would define animals in terms of food capture – they go out and get their food – and we’d define plants as sedentary manufacturers of their own food, using sunlight for energy.

Nevertheless there are plants that dine on animals: quite the reverse of the expected!

Probably the most famous meat-eating (carnivorous) plant is the Venus Flytrap. In scientific jargon it is named Dioneae after Dione, mythical mother of Venus, goddess of love. This is an apt name when one considers how the plant lures and catches victims.

The trap consists of two fringed lobes, seemingly hinged by the midrib, at the end of each leaf. The lobes are bright red in the sun and they exude sweet scents to attract the unwary insect.

Once a suitable insect has landed on the trap, it snaps shut in a fraction of a second. Interlocking “teeth” prevent escape of the victim. The more it struggles, the more tightly the trap closes. The leaf now releases a slimy fluid which contains enzymes able to digest protein.

Then, once the meal has been digested, the fluid containing the new nutrients is reabsorbed into the leaf. Dry once again, the leaf opens and the victim’s empty shell falls away. The trap is again ready for business. 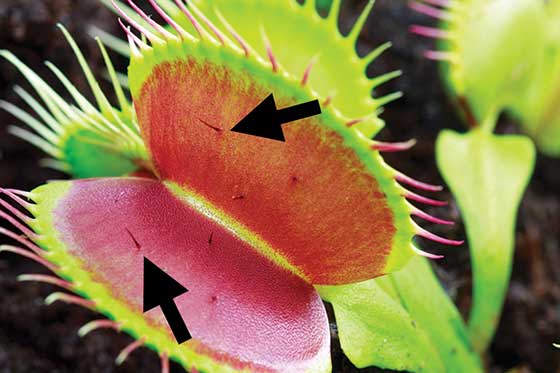 PROMINENT “TRIGGER HAIRS” – 3 ON EACH SIDE – SPRING THE TRAP!

How does the leaf surface “know” when a suitable victim has landed on the trap? Prominent hairs on the surface of each lobe are trigger mechanisms. Raindrops and small insects fail to spring the trap. Two hairs must be touched, or one hair moved twice in order to produce closure. This ensures response only to large insects, not useless small ones.

How is the message of a suitable victim translated into slit-second action? No one really knows. An electric charge has been shown to flash over the leaf surface as the trigger hairs are stimulated. One guess suggests that the charge produces a rapid change of some chemical, from soluble to insoluble (eg. from sugar to starch), in the cells of the upper half of the leaf. Water then moves into the lower leaf cells which now contain relatively more dissolved solids. These cells swell, causing the leaf lobes to move together. This sounds plausible but slow. Obviously it is not the final answer.

One would suppose so specialized a plant would have many less complex relatives. Such is not the case. The genus contains only one species. Even this species is very restricted in its occurrence. The plant’s natural habitat is sandy soil within 100 miles of Wilmington, North Carolina. Except for another genus with a single species, there are no similar plants.

So many important parts

It is conventional scientific wisdom that the trapping mechanism of Dionaea developed in response to nutrient-poor soil conditions. It is difficult however to imagine how transitional forms could exist. If the sweet aroma did not attract insects, the trap would be useless. Without rapid closing, or without teeth on the lobe edges, the insect would escape. Without suitable gland cells to release and absorb digestive fluids, all the rest would be useless.

It is easy to see why Darwin called the flytrap ‘the most wonderful plant in the world’! It is more difficult to understand how he could have presumed evolution of such a precise mechanism. Natural selection could not select for traps which lacked any one component of the system. Only the fully developed system, produced by the Creator, can account for these amazing plants.

This article first appeared in Creation Science Dialogue, Volume 8, Number 1, 1981, and is reprinted here with permission. Dr. Margaret Helder is the author of “No Christian Silence on Science” which we review here, and you can buy here.

“Markus showed us how to find meaning in suffering”

There was nothing about USS Meredith Victory that would make it stand out from the crowd. The ship was a cargo vessel, built as part of the merchant m...