By: Joanna Vanderpol and Jon Dykstra 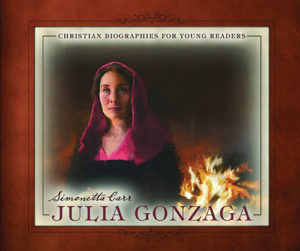 This is another book in Simonetta Carr’s “Christian Biographies for Young Readers” series and it is once again a very well researched book with lovely pictures.

Julia Gonzaga was born in 1513 into a wealthy nobleman’s family. She was married at age 13 and was widowed 2 years later. She never remarried but became a strong voice for the Reformation in Italy, and supported it financially.

In the land of the Pope, the Reformation didn’t take place as it did throughout Europe. In 1542 the pope reopened the Sacred Office of the Inquisition, a court that put Christians on trial who opposed the teachings of the Roman Catholic Church. Many believers were tortured and martyred. Italian Bibles were outlawed until 1769 when the Roman Catholic Church published a translation of the Latin Bible. I learned that education flourished in the Protestant countries making it possible for the common people to read the Bible. In 1861 only 25% of the people of Italy and Spain, predominately Roman Catholic, could read and write over against 69% in Europe and 80% in USA.

Julia Gonzaga is not at all well-known making this book an asset to the many books written about the Reformation in Europe. For children ages 7-12.

God’s Outlaw: The real story of William Tyndale and the English Bible 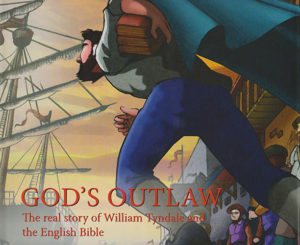 We all have many Bibles in our homes, something we take for granted. But there was a time when no one had that wonderful gift, a Bible which they could read and use to instruct their children. William Tyndale (1494) was a very learned scholar and the reading of the Bible in the original languages was a life-changing experience for him which he wanted to share with all people “even a ploughman.” Against the wishes of the Church and King Henry VIII, he began this task. But soon he had to flee to Germany and from there his pamphlets found their way into the hands of the common people in England. The Church responded by imprisoning and killing many of them.

In 1535 Tyndale was betrayed, refused to bow the knee before the church leaders and was burnt at the stake  Just before he died he prayed “Lord Jesus! Open the King of England’s eyes!” And two years later King Henry VIII decreed that the Bible should be available to all people.

This book ends with some thoughts and questions for reflection. The pictures are bright and descriptive edging towards the graphic novel style. This is a good book for Primary school teachers to read to their class.

This one is not widely available but can be found at Christianbooks.com. 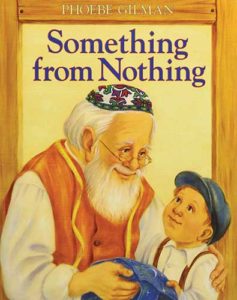 This children’s book, winner of the Ruth Schwartz Award, has become my favorite book to read out loud to my grandchildren. It is adapted from a Jewish folktale and in wonderful, rhythmic language tells the story of Grandpa who lovingly sews a blanket for his newborn grandson to “keep him warm and to chase away bad dreams.” As the boy grows up, the blanket wears out and is altered into a jacket, which is altered into a vest, etc.

The pictures are so delightful and add to the story. For instance, we see that mom is pregnant and then a few pages later a little sister appears in the story. A second wordless story takes place along the bottom of each page. Father and mother mouse set up house and as the little mice appear, use the scraps of material from the blanket that falls between the floorboards and make them into clothes for their family and also into blankets and curtains for the wee mouse house.

This is a type of story where you want to take your little dear one onto your lap and just warmly snuggle and read, explore the pictures and find lovely little treasures.

My not even six-year-old already knows that some people think girls can marry girls. And she knows God says that isn’t so. We haven’t had to talk – yet – about folks who think that girls can become boys, but when that time comes, this book will be a help. 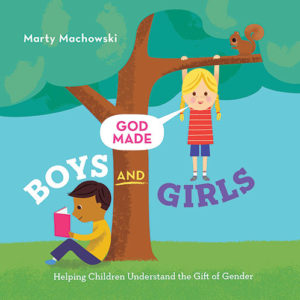 The story begins with a fast little girl, Maya, outrunning the boys…so one of them teases her that this means she’s going to become a boy. And that gets her worried. Fortunately, this little girl has a great instructor, Mr. Ramirez, who teaches the class that gender is a “good gift from God.” He shares how, if you are a boy, then you are a boy right down to your DNA. And the same is true for girls too. Mr. Ramirez then brings things back to the very first boy and girl, Adam and Eve, and how their Fall into Sin happened because they wanted to do things their own way instead of God’s good way. Today some want to do try their own way – not God’s way – when it comes to their gender too. One of the many things I appreciated about this book was how clear kids were taught what’s right, and then encouraged to act kindly to those who are confused.

Finishing up the book are a couple of pages intended for parents, which, in small print, pack a lot of information on how to talk through gender with our kids.

One caution: there is one depiction of Jesus, as a baby and with no real detail given, on a page noting that God the Son became a tiny speck inside a girl, Mary, and became a man. I don’t think this a violation of the Second Commandment, but maybe someone else might. The only other caution is in regards to what isn’t tackled in this story: gender roles. God made us different, and He also gave the genders some different roles and also gave us some different general tendencies. So yes, as the book notes, some boys do like dancing, and some girls like car repair…but that’s not the general trend. And because the general trend is never noted in the book, this absence could, if left undiscussed, leave young readers with the impression that no such trends exist. Then they would fall for a different one of the world’s gender-related lies: that other than sexual biology, men and women aren’t different at all.

This is not a picture book you are going to read over and over with your children because it is more of a conversation starter than a story. But it is a wonderful help for parents in discussing an issue that none of us ever confronted when we were kids. It is a different world today, and we want to be the first to broach these topics with our kids. Reading and discussing a book with your little one is a fantastic way to do it.

Sophie and the Heidelberg Cat 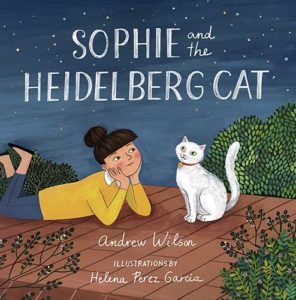 The story, written in engaging rhythm, opens with Sophie crying because her sister broke her dollhouse and Sophie, in anger, pushed her over and then yelled at her parents. As she thinks about what just happened and meditates on how bad she is, she looks out the window and sees the Heidelberg’s cat from next door.  Surprisingly, the cat asks her why she is crying and Sophie tells her sad story. He invites her onto the rooftop and as they walk along, they chat.

At first I thought, oh no, this is not a Reformed story, as Sophie tells her story and how she tries to be so good but fails.

But then the cat sets her straight by explaining that no one can be good because we are all sinful. There is only one person who is good and that is Jesus. Only He can free us from our sins. The cat then uses Lord’s Day 1 from the Heidelberg Catechism and comforts Sophie with the words that “I am not my own” but belong to Jesus.  This is a lovely book for ages 4 and up who can understand the concept of God’s love and grace in Christ Jesus.

Documentary 9 min / 2003 This film changed me. It is a video, taken in the womb, of an abortion. It is evil uncovered and brought into the ligh...

Economics 101 in 7 great quotes (6 min) David Bahnsen's company manages more than $3.5 billion in client assets but, in Reformed circles, he might be...