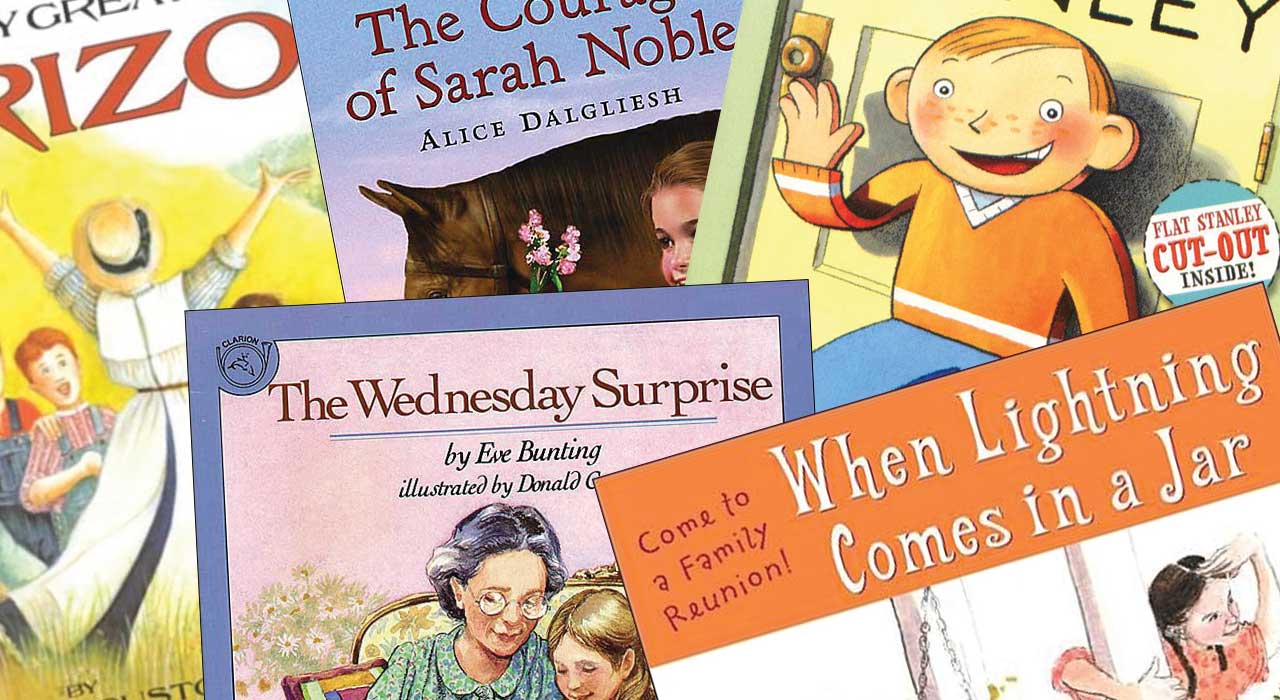 We are “People of the Book” so reading should be, and is very important, to us. The goal of all reading is to become readers of the Good Book. It is not enough to teach our children the ability to read; we must also nurture our children to be aware that the content of books should lead us to the author of the Good Book. The following is a treasure trove of books that tries to help with attaining that goal.

To make a list of favorite books is a daunting task. No sooner is the list completed and another treasure is found and could be added to the repertoire of great books. I hope you get reacquainted with some of your favorites and that your own list of great books will grow. Almost all of these selections are picture books that preschoolers and children in the early grades will enjoy, but there are several “chapter books” which are intended for children who are in at least Grade One or Two (these exceptions are noted in the reviews that follow).

Happy reading with your children! Some books are timeless gems. Even though they have been written many years ago, these classics have stood the test of time and continue to appeal to children today. On occasion these classics have been updated – “Disneyfied” – and have lost a lot of their substance, so make sure your read the original version.

Make way for the duckling
by Robert McCloskey
Mr. and Mrs. Mallard are looking for just the right place to raise their brood of duckling in New York City.

Caps for sale
by Esphyr Slobodkina
Some monkeys take on the saying of “Monkey see, monkey do” and get into monkey business with a hat peddler.

Tikki Tikki Tembo
by Arlene Mosel
Help is slow to come for a Chinese boy with a long name who falls into a well.

Frog and Toad are friends
by Arnold Lobel
Get every Frog and Toad book in this series and you will not be disappointed.

The story of Ping
by Marjorie Flack
First published back in 1933, this is the story of a funny duck and his misadventures living on the Yangze River.

The world of Pooh by A.A. Milne
Watch out for the many Disneyfied versions of this story, as only the classic orginal retains the author’s lyrical charm. This is a chapter book, so it might seem to be something intended for grade school children, but even young children are likely to enjoy it.

Joseph had a little overcoat
by Simms Taback
Joseph’s worn coat becomes smaller pieces of clothing until he makes it into a button that he then loses, but that is not the end for, “You can always make something out of nothing.”

Stone soup
by Marcia Brown
When hungry soldiers come to a town of greedy inhabitants, they set out to make a soup of water and stones and the whole town enjoys the feast.

The tale of Peter Rabbit
by Beatrix Potter
Mrs. Rabbit tells her bunnies not to go into Mr. McGregor’s garden, but Peter does not listen and gets into all kinds of mischief.

BOOKS TO TICKLE THE FUNNY BONE

We have all hear it at one time or another: “I don’t like to read.” One way to hook your reluctant reader is to start with humorous books. No one can walk away from a book that makes them laugh and humorous books will then help build bridges to other types of books. A book that tickles the funny bone will help the child who doesn’t like to read become one who loves to read.

More parts
by Tedd Arnold
A hilarious book where a boy fears that the idioms he hears all around him (like “give me a hand”) are to be understood literally.

Cloudy with a chance of meatballs by Judi Barrett
Imagine a town where meals rain from the sky! Disaster strikes when the town is bombarded with massive-sized portions of food.

Knuffle bunny: a cautionary tale
by Mo Williams
A small girl, not yet able to talk, tries to get her father to understand that her beloved bunny has been left behind at the laundromat.

The principal’s new clothes
by Stephanie Calmenson
This is a respectable twist on the Han Christian Andersen fairytale The Emperor’s New Clothes.

Hairy Maclary from Donalson’s dairy
by Lynley Dodd
A rhyming story about a cheeky little dog and his pals who gets into mischief.

A FESTIVAL OF THE ARTS

Can your child recognize the names: Beethoven, Bach or Brahms? How about Monet or Michelangelo? Even if you are not the artsy type once you read these tales you will have to admit these artists lead colorful lives that make great stories to read.

Hallelujah Handel
by Douglas Cowling
Handel, living in the Charles Dickens era, uses his music to help some of the destitute homeless boys of England. This is 48-page book, so most suitable for children in at least Grade One or Two.

Camille and the sunflowers by Laurence Anholt
Based on a true story of a boy and the famous painter Vincent van Gogh.

Berlioz the bear
by Jan Brett
A story based on the composer Berlioz and his strange sounding double bass.

Linnea in Monet’s garden
by Christina Bjork
A young girl visits Monet’s garden in Paris. This book contains many pictures of Monet’s paintings, and also quite a bit of text, so it is best read to slightly older children.

The Farewell Symphony
by Anna Harwell Celenza
Here is the story behind Joseph Hayden’s famous Farwell Symphony. This picture book has quite a bit more text than average so it is best suited to grade school children.

It is good to set aside at least one traditional time each day for reading. The best time to read to wiggly children is at night when they are tired and ready to go to bed. The snoozer books in this list deal with the ritual of going to bed and hopefully will help your active child relax and soon drift off to sleep.

The napping house
by Audrey Wood
Grandma takes a nap and her grandchild climb on top of her, and then one thing leads to another, and disaster leads to delight. by Margret Wise Brown
A little rabbit is tucked in bed but he must say goodnight to everything in the room as it grows darker and darker.

Llama, llama, red pajama
by Anna Dewdney
Baby Llama has a hard time sleeping and needs his mama’s assurance that, “She’s always near even if she’s not right there.”

The prince won’t go to bed
by Dayle Anne Dodds
A little prince in a medieval world will not go to bed and nothing will help… except a goodnight kiss.

Russell the sheep
by Rob Scotton
Even sheep count sheep when they can’t sleep.

Ira sleeps over
by Bernard Waber
A little boy must decide if he wants to take his teddy bear to a sleepover at his friend’s house.

Fancy Nancy
by Jan O’Connor
Nancy is a girl who loves everything fancy; even the words that she uses are fancy.

The courage of Sarah Nobel
by Alice Dagliesh
A young girl journeys into the wilderness, in this chapter book, and there overcomes her fears of wolves and savage Indians.

Hannah
by Gloria Whelan
This 64-page chapter book is set in the pioneering days. When the new teacher persuades a family to allow their “poor, blind Hannah” to attend school, the young girl learns how to read and write.

The story of Ruby Bridges by Robert Coles
This is the true story of an American six-year-old girl who was the first black to attend an all-white school; it is a story of courage and faith.

Ramona
by Beverley Cleary
There’s never been anyone quite like Ramona, a girl with boundless energy and mischievous antics.

My Great-Aunt Arizona
by Gloria Houston
Arizona was a girl who loved to sing, dance, read and dream of visiting faraway places, though she never did travel. Instead she became a teacher who influenced many children.

The gardener
by Sarah Stewart
Set in the Depression era, a young girl is sent to live with her crotchety uncle because her family is struggling financially, and she tries to brighten the world around her.

BOYS WILL BE BOYS

Readers often make connections to what they are reading. Children will identify with and want to be one of the characters in a story, which thus becomes a role model for the reader. Therefore, what your child is reading is also developing who they are becoming as an adult. A good book should have characters that we wish our children to emulate. Here are some such characters. Flat Stanley
by Jeff Brown
Stanley becomes flattened when a bulletin board falls on him and he discovers that there are some things only a flat person can do.

The Kingfisher book of great boy stories
This 160-page anthology includes passages from such stories as Winnie-the-Pooh, Flat Stanley, The Jungle Book and The Lion, the Witch and the Wardrobe. This is a great way to get a “taste” of children’s classic literature.

Zella Zack and Zodiac
by Bill Peet
A zebra and ostrich help each other survive in this zany tale.

As a doting grandparent I have learned there is a unique bond between the young and the elderly – both understand that the other needs special care and attention, and both are happy to reciprocate. The following books beautifully portray this loving relationship. So grandparents, find a great book, cuddle up with a child, and read. You’ll be surprised what you have in common.

When lightning comes in a jar
by Patricia Pollacco
Grandma’s ritual of catching lightening bugs in a jar will be remembered for generations to come.

Wilfrid Gordon McDonald Partridge
by Mem Fox
Young Wilfrid loves his friend from the nursing home because she has a long name like him, and he wants to help her find her lost memory. by Helen Buckely
Family life can be very busy. But Grandfather always has time to walk with his grandson and look around “just as long as they like.”

The old woman who named things
by Cynthia Rylant
An old woman who has outlived all her friends is reluctant to become too attached to anything she might outlive. So when a stray dog starts visiting she certainly won’t give it a name – she doesn’t want to become attached! However, when it goes missing she has a change of heart…

The Wednesday surprise
by Eve Bunting
A granddaughter teaches her grandmother to read.

Now one foot, now the other
by Tomi DePaola
Grandpa teaches Bobby to walk when he is young, and later in life when grandpa has a stroke Bobby helps his grandfather.