By: Wes Bredenhof and Jon Dykstra

2 to help us understand the Muslim holy book

WHAT EVERY CHRISTIAN NEEDS TO KNOW ABOUT THE QUR’AN 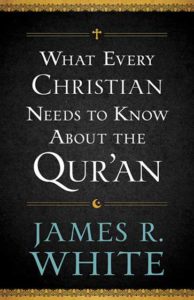 More than ever, Christians need to be equipped to deal with the challenges posed by Islam.  We often live beside Muslims, work alongside them, and study with them.  It’s good to have helpful resources to inform our conversations with our Muslim neighbors.  Though it is now a couple of years old already, James White’s book on the Muslim sacred text is one of those valuable helps.

White is the author of numerous non-fiction books.  He’s well-known as an author, speaker, and debater.  He is an elder in a Reformed Baptist church in Phoenix, Arizona, and the director of Alpha and Omega Ministries, an organization with a focus on apologetics (done in a Reformed, presuppositional manner).

Rather than summarize everything in this book, let me just highlight two points which stood out for me.

Everyone affected would affirm that by the early decades of the seventh century, God Himself would have a perfect knowledge of what the doctrine of the Trinity actually says. And if that doctrine does not accurately represent His own self-revelation, He would be in the perfect position to refute its falsehoods with devastating precision.  But is this what we find in the Qur’an?

The Qur’an doesn’t get the Trinity right, and so the Qur’an can’t be taken seriously as a revelation from God.

Qur’an’s claim about itself is patently false

In chapter 11, White has a penetrating discussion about the text of the Qur’an.  Muslims claim that it is a perfect, immutable text. Of course, that’s contrasted with the text of the Bible which, they allege, has been mutilated by Jews and Christians.  White gives a couple of examples from Muslim writers. This is one of them:

White demonstrates that this claim is patently false. He notes that “even widely published editions of the Qur’an contain information indicating variations in the very text.”  He cites Yusuf Ali’s edition with its note on Surah 33:6.  In The Hidden Origins of Islam (ed. by Karl-Heinz Ohlig and Gerd-R. Puin), there is an essay by Alba Fedeli on variant readings in early Qur’anic manuscripts.  It is simply not true that there is a single immaculate Qur’an text preserved from the time of Muhammad.

One question I wish White would have addressed is whether these claims are made in ignorance or deliberately to deceive.  There is a doctrine in Islam known as al-Taqqiya.  This teaching says it is permissible to lie in order to advance the cause of Islam.  This is one of the things making Islam such a threat to western civilization in general, and Christianity in particular.  How can you tell when a Muslim is lying about Islam?

I would recommend this book to anyone who has regular contact with Muslims.  Be aware though: most, if not all, of the points raised by White in the book have rebuttals by Muslim apologists somewhere online.  The rebuttals are weak, but if you are going to use White’s material in conversations it would be advisable to prepare yourself beforehand for what your Muslim neighbor may bring back in response. 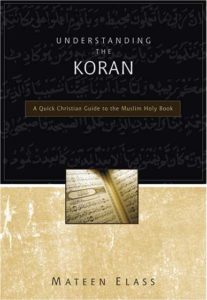 If I were to offer a one-sentence review I’d describe this as the most readable and most loving Christian book on Islam I’ve yet read, and while it isn’t a very big book, there is a lot packed in it.

The advantage of this “Quick Christian guide to the Muslim Holy Book” is how much it packs into its small size. The author, Mateen Elass, wanted to craft an introduction to the Koran that anyone could pick up and read, and somehow he’s managed to make it both easily digestible and 100% solid meat – there’s no fluff here.

Elass is a Presbyterian pastor who was raised in Saudi Arabia so he knows what he’s talking about it, and can offer a solid, biblically-grounded insight. He outlines how the Koran is a compilation of muddled Bible stories, Gnostic accounts, and Jewish folk tales, and compares and contrasts Christian views on our Bible with Muslim views about the Koran.

The only caution I had regards Chapter 6 “Is Allah a False God?” where the author argues that, like the Samaritans in New Testament times (see John 4:22), Muslims worship the real God, but in ignorance. This is a controversial stance – Muslims insist that Allah has no Son – but it becomes less so when the author makes it clear he isn’t arguing for any sort of equivalence between Islam and Christianity or that Muslims can be saved apart from Jesus.

Introductions to Islam can generally be divided into those that have nothing but good to say about Islam, and those that have nothing but bad. One strength of this title is that it takes a third approach – the author is Christian, but one knows and loves Muslims, so while he is direct, thorough, and quite devastating in his critique of the Koran, he always remains calm, and never resorts to rhetoric.

Understanding the Koran is small and engaging enough to be read in a few evenings, but the depth of material, and the review questions for each chapter, make this one worth reading a second time at a slower more studious pace.

When Big Tech comes after anyone