They say you shouldn’t judge a book by its cover and that was never more true than with Francine River’s novel Redeeming Love. When it first appeared on bookshelves it was marketed with a schmaltzy romance cover. Two Reformed ministers told me it was fantastic, but I couldn’t get over the cover. I only got around to reading it a year or two later, after it came out with a much more subdued cover, one that I could walk around in public without all the other boys making fun of me. 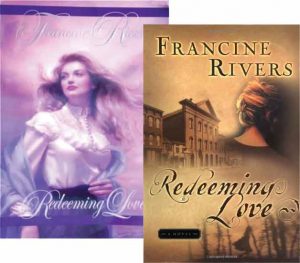 It was worth the wait.

A powerful, poignant, even brilliant novel, it tells the story of Michael Hosea, a settler in the California of 1850. The story is inspired by the biblical book of Hosea, and the true power of the story is in how it forces the reader back to the Bible to reexamine a small prophetic book many have overlooked. You can’t help but study the book of Hosea after reading this novel.

If you are well acquainted with Hosea you’ll understand why this novel comes with a “PG-13” rating. The prophet Hosea, after all, marries a prostitute, and Francine Rivers closely parallels those facts in her account. So some disturbing subject matter is dealt with that probably isn’t suitable for young teens.

Now, I’m always leery of fictionalized retellings of biblical stories (whether that be books or filmed versions like The Chosen, Passion of the Christ, or Josh and the Big Wall), and with good reason. I remember one novel about the apostle Paul that left readers with the impression that he and James actually disagreed as to the importance of works, which is entirely untrue. Francine Rivers also has a number of fictionalized biographies of biblical characters and because fact is mixed with fiction it is so very hard, after reading one of those stories, to remember just what the Bible really says. So, I don’t think fictionalized Bible tales are a great idea.

But because this is inspired by, rather than purporting to be, the book of Hosea, Redeeming Love is something else entirely. It would be hard to confuse this with the original source material. And yet, it is an insightful parallel of Hosea that might make this somewhat mystifying Bible book a little more understandable for some readers.

Jon Dykstra and his siblings blog on books at www.ReallyGoodReads.com.

The Man in the Dark

by Douglas Wilson 258 pages / 2019 Some books only merit a quick read, others should be slowly savored, and a select few are so good you just have to read them out loud to your wife. This is that third sort! Savannah Westmoreland, a self-assured school teacher, finds herself in the middle of a love triangle. Except that it wouldn't be accurate to call what the town's biggest businessman feels for her love. Desire...hunger...lust. But not love. And while the church's newly arrived pastor is interested, and seems a worthy sort, he can't get past the walls Savannah has set up. But events – and friends – conspire against Savannah, putting her repeatedly in the pastor's company. And even as he uses these moments to make a good case for his marriable merits, Savannah is still actively discouraging him. Why? Something from her past still has a hold on her. The pastor is trying to get around this obstacle, but the businessman is trying to discover exactly what her secret is so he can use it to control her. This is Douglas Wilson's third novel, but first romance. It is the second of his books that I've read out loud to my wife, the other being Flags out Front. That's really the highest praise I can give a book. But lest you think Wilson is only a two-hit wonder, I'll share that his other novel, Evangellyfish, won Christianity Today's 2012 best fiction award. This man knows how to tell a story. As you might suspect of a book written by a Reformed pastor, there is a lot of theology, from the dinner table conversations to the metaphor underlying the whole story. But conversations about God are a great way to learn about God, and even though the book has a pastor right in the mix, this is not a sermon disguised as a story. This is, instead, great fiction telling something true. And if you think the ending a tad contrived, I might agree with you. But I'd also invite you to consider what the author is saying about this God of wonders that we serve. And speaking of truth-telling, I should own up that as much as I enjoyed reading this out loud to my wife, she didn't get to hear the whole story. That's because when she fell asleep I just had to keep reading. ...

You can download or listen to the podcast version (7 minutes) here. ***** Back when I was studying history as a graduate student, one of my profs pl...

by Jack Schaefer 1949 / 176 pages Sometimes I reread children’s literature because I enjoy being captured again by the quality of writing and th...

O’Toole: doctors shouldn’t be forced to murder aging adults themselves, but need to make sure the murders get done